Obama: Was It The Unions What Won It? – Updated. 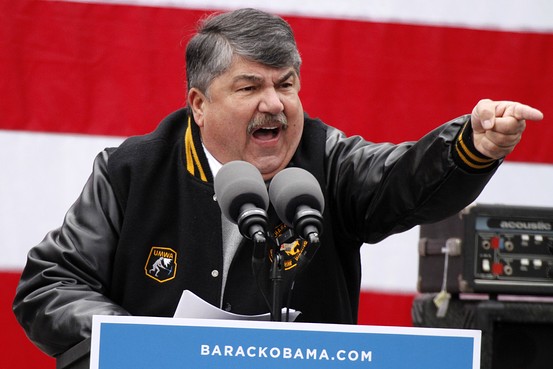 US unions are rightly claiming significant credit for the resounding election win by Barak Obama.

The AFLCIO, in the form of its barnstorming president Rich Trumka, said that the swing states of Ohio, Wisconsin and Nevada were won through “union field operations”.

The AFLCIO released the findings of a poll commissioned from Hart Research Associates and conducted 5-6 November showing that 70% of union members in Ohio backed Obama, and 62% of working Ohioans not covered by union recognition followed suit.

Nationwide, 65% of union members supported Obama, down two points from 2008 (but a smaller decline than seen among all voters this year). Non-union working Americans backed the president by 66%, according to the survey among 802 AFLCIO members who voted this time, plus 827 non-union workers in 11 important states.

Hart’s research showed that: “Democrats had won the tax issue in this election cycle,” pollster Guy Molyneaux said. That means voters support asking the wealthy to “start paying their fair share of taxes” (62%). They also want Washington to “protect Medicare and Social Security benefits from cuts” (73%)”.

In California, they even voted specifically to increase income tax for the rich.

Trumka said: “People don’t want cuts to Social Security and Medicare and Medicaid – even the people who voted for Mitt Romney don’t want that. That’s a consensus. They don’t want to continue to tax the middle class to give more tax breaks to the rich.”

Thanks in part to union outreach and friend-to-friend contacts, workers not in unions received the same information about Romney and the Republican agenda as unionised workers thus expanding the union message.

One of the US unions right at the forefront of the campaign were the United Steelworker’s, Unite’s partner in the global union Workers Uniting. Leo Gerard, president of the Steelworkers (USW), said the US election outcome was defined by the USA’s union workers in the heartlands, casting their votes to move America forward:

“Most American workers chose Obama for turning the economy around, passing the Affordable Care Act, rebuilding the auto industry, enforcing our trade laws and adding 5.5 million jobs in the last 32 months. We have more to do, but we’re on the right track with this President. Our union members fought Super PACs (Political Action Committees) set up by millionaires and billionaires with boots on the ground, worker-to-worker. It’s an historic triumph for the commitment we made together with other unions and progressive allies to fight back against the corporate influence in elections and the efforts to suppress voting. The USW organised a formidable army of volunteer union activists, retirees and poll watchers, who focused on eight battleground states and engaged in some 63 key congressional contests.”

The Steelworkers said members knocked on 173,800 doors. Another 376,790 direct campaign mailers were sent to USW active and retired members who resided in the battleground states.

State campaigns and ballot issues were setup separately within USW district structures to deal with propositions that threatened the rights of workers to join unions and limiting their rights to engage in the political process.

Among the USW field volunteers in battleground states were Jessica Schiessl, 30, paper mill worker in Oshkosh, Wisconsin. She was door knocking and a poll watcher on Election Day. “The experience has changed my life,” Schiessl said. “I’ve only got a few years work time, but I’m also fighting for the 20-year mill workers who don’t want candidates who have a record of shipping jobs offshore.”

Joe Sterling, 48, of Ohio USW Local 3610 a steel maker in Canton, led dozens of union volunteers while on union-paid leave from his job for the past five months to mobilise for candidate rallies, coordinate phone banks, and to distribute handbills at worksites starting at 5:30 am. “What kept me motivated was the threat by those severely conservative candidates who promised to shutdown workers’ rights to a union.”

In Nevada, Local 5282 John Martinez, 45, took a leave from his chlorine operator’s job at Olin Clor-Alkali Corp., in Henderson, starting after Labor Day. “During the past week I had 25 union volunteers doing block walks and helping with GOTV for early voter participation that included my three sons wearing Steelworkers for Obama-Biden T-shirts.”

A USW Local 710 paper worker Rodney Crow in Colorado, another battleground state, has been working full time on leave from his corrugator operator’s job since June to recruit campaign volunteers among USW-represented plants in the Denver area for worksite flyers and neighborhood block walks. “I worked early morning until late night with hope we would re-elect President Obama and deliver votes for at least two Democratic congressional seats,” he said.

The SEIU (Service workers) said that its members knocked on 5 million doors, including 3.7 million in the battleground states. “We had 100,000 volunteers across the country in the final days,” said the president of the SEIU Mary Kay Henry. Lee Saunders of the government workers union AFSCME described the effort as  “the smartest, the biggest and the broadest effort that labor’s ever run.”

And as if to seal the deal, GOP strategist Soren Dayton, interviewed on BBC’s Newsnight, admitted that the strategy of concentrating union effort in the battleground states, notably Ohio and Wisconsin, where the unions have fought recent concerted battles against right wing governors, paid off.

This blog first appeared on Stronger Unions on November 8th