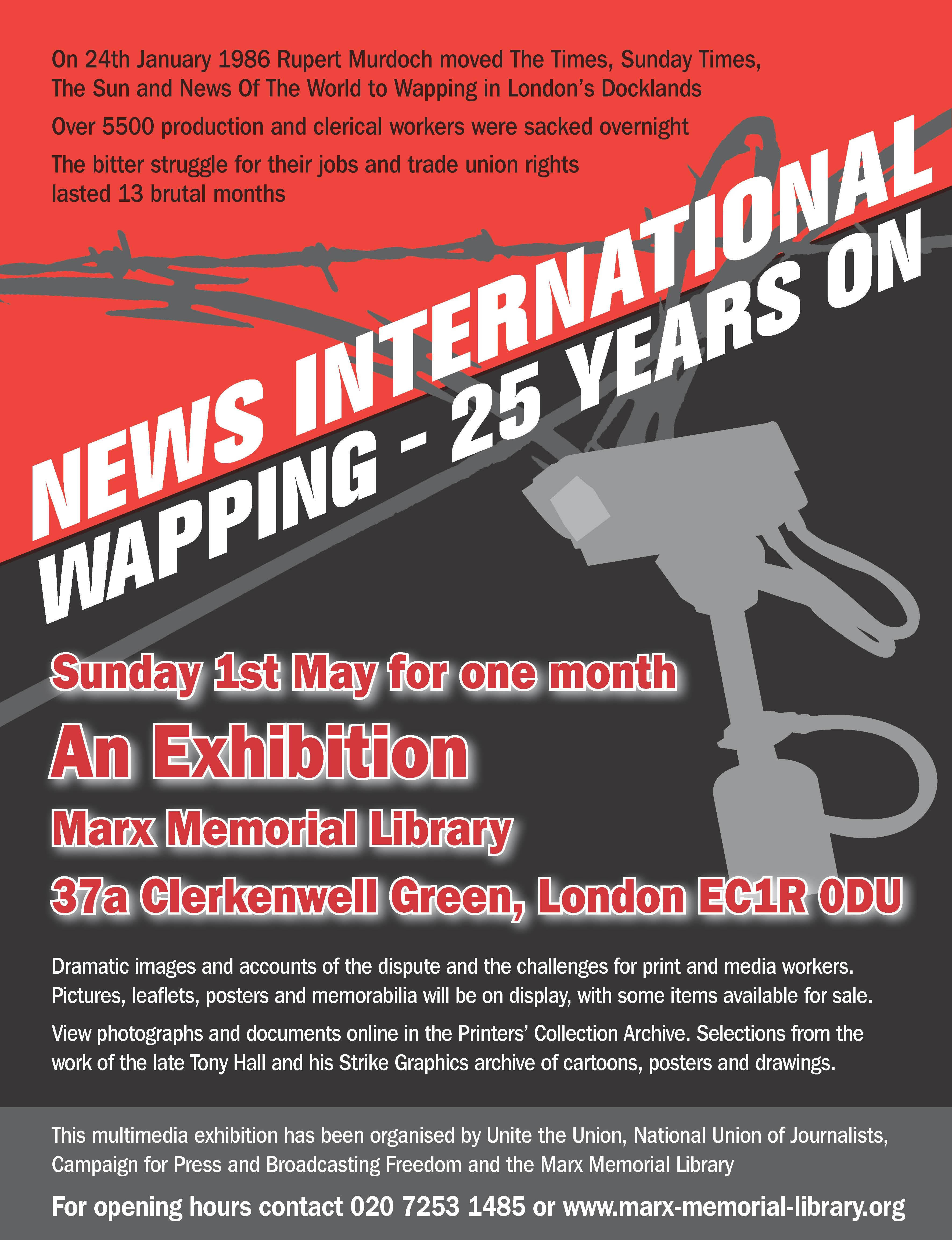 A special exhibition of memorabilia telling the story of the dispute between the print unions and Rupert Murdoch 25 years ago opens on May 1st at the Marx Memorial Library, Clerkenwell Green in London, home to the archives of the print and papermaking unions of the UK.

The dispute at Wapping was one of the key industrial disputes of the Thatcher era, when 5,550 production and clerical workers were sacked by Rupert Murdoch overnight.

Dramatic images, photographs and accounts of the dispute – when Rupert Murdoch used his vast wealth, aided by the Conservatives’ anti-union legislation to facilitate the dash to Wapping – will be on display.

Unite General Secretary, Len McCluskey said: ‘The industrial disputes involving the print unions in the 1980s, starting with the Stockport Messenger and culminating with News International at Wapping were, along with the miners, sustained blows against organised labour in the UK that the Conservative victory in 1979 had of course heralded, but the seriousness of which was little realised.’

‘We must take inspiration from the struggle at Wapping, not to mournfully look backwards, but to redouble our efforts to organise and to win for working people in this country as they face tremendous challenges to their living standards and rights, yet again from a right-wing government.’

‘So too must we seek to remind the Labour Party that only a firm commitment to introduce a new framework of employment law and trade union rights will make this country fully compliant with our international obligations, and put working people in this country on the same footing as their counterparts across Europe.’

The exhibition will be open for one month before many of the exhibits will go on display at the TUC’s Congress House in London and then in the autumn to the Unite offices in Liverpool.

On April 28th a special preview will take place at the Marx Memorial Library at 3.00pm.

Speakers at the preview will include: Tony Dubbins and Brenda Dean the leaders of the print unions the National Graphical Association and SOGAT during the dispute; Frances O’Grady DGS of the TUC; Ann Field, former Unite National Officer who has curated the exhibition, along with veterans of the dispute. The preview will be chaired by Tony Burke, Unite Assistant General Secretary.

2 Responses to News International Dispute Exhibition opens on May 1st