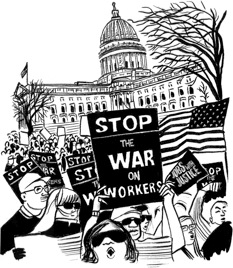 By Eric W. Dolan from The Raw Story

The Democratic Party of Wisconsin filed a complaint on Tuesday seeking to stop what it called a Koch brothers-funded scheme to suppress Democratic votes in upcoming Republican recall elections.

Politico reported that Americans for Prosperity sent absentee ballots to Democrats in two Wisconsin state Senate recall districts with instructions that could render the votes ineligible. Ballots must be received by August 9th to be counted, but the instructions say to return the paperwork two days later, by August 11th.

The complaint alleged that Americans for Prosperity “displayed a continued pattern of tampering with the electoral process in Wisconsin with elaborate, illegal and fraudulent schemes designed to suppress Democratic votes.”

Americans for Prosperity was started by oil billionaires Charles and David Koch, and has been associated with the tea party movement. The Koch brothers’ political action committee gave Republican Gov. Scott Walker roughly $100,000 in campaign contributions during the 2010 election.

“Scott Walker has sought the help of the corporate front group ‘Americans For Prosperity,’ and here they come with dirty tricks clearly meant to meddle in our elections and suppress votes against the Koch Brothers’ agenda,” Democratic Party of Wisconsin Chair Mike Tate said Monday in a statement.

“Wisconsin’s election authorities must stop the black hand of the corporate special interests and their front groups who are trying to strangle democracy in our state and support the six Republican senators now facing recall,” he added.

Matt Seaholm, the State Director for Americans for Prosperity, told TMJ4 that the misinformation was “just a typo.”

Under Wisconsin law, preventing the delivery of absentee ballots carries a fine up to $1,000 and up to six months in prison per violation.