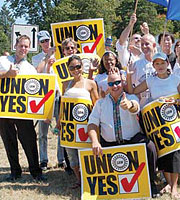 Under a new ruling from the  US National Labor Relations Board most private employers would have to display posters informing workers about their right to form a union under a proposed federal rule.

The planned rule, announced this week by the NLRB would require businesses to post notices in employee break rooms, canteens or other prominent locations to explain a worker’s rights to bargain collectively, distribute union literature or engage in other union activities without reprisal.

The move to issue a broad rule signals a more aggressive posture by the NLRB which usually makes policy on a case-by-case basis in individual disputes.
It comes less than a year after President Obama made several recess appointments to give the board its first Democratic majority in a decade. Obama’s appointments to the board were held up for months over Repulican concerns that one nominee — former AFL-CIO counsel Craig Becker — would be too sympathetic to unions.

As unions struggle to pass pro-labour legislation in Congress, leaders are increasingly looking to the labour board and other federal agencies to help reverse what they view as an increasingly hostile atmosphere for organising new members.

Unions are trying to reverse years of membership declines in the private sector, where just 7.2 percent of employees belong to a union.

In recent months, the labour board has expressed an interest in allowing electronic voting for union elections. The board is also speeding up its review of cases where employees are fired during union organising campaigns.

The rule would not take effect for at least 60 days, during which the agency is taking comments.

In a statement, the board said it believes many employees protected by the National Labor Relations Act “are unaware of their rights” under the law. The notices make clear that workers don’t have to join a union and outline other legal protections against union intimidation or misconduct.

Similar posters are already required to be displayed in the offices of government contractors and subcontractors under a White House executive order that took effect in June. The directive was one of the first executive orders Obama signed shortly after taking office last year.