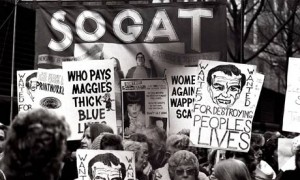 Those were the days. When Rupert was in his pomp and his print workers were on the streets. Ah yes, he remembers them well. And the seminal battle of the 1980s lives again in the minds of many thanks to an exhibition at the TUC in London to mark the 25th anniversary of the Battle for Wapping.

It’s an exhibition of photos, documents and personal accounts and on its first day, Monday, it received a visit from a conspicuous delegation of power types in suits. Who are these people, wondered Ann Field, the curator. She went to ask them. Oh we’re from Farrer’s, they explained. Yes Farrer’s, the law firm that famously advised Rupert that the cheapest way to sack his printers would be while they were taking industrial action. Brought it all back for the lawyers who plotted the strategy.

Their letter to the mogul has pride of place and they came out of the dispute very well, especially Geoffrey Richards, the senior lawyer who penned the fateful legal advice. He was there on Monday. They loved the exhibition. Left a wistful note in the book. “A trip down to memory lane.”