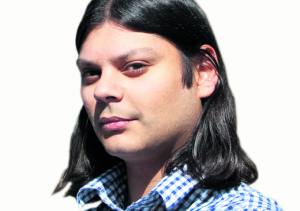 Ben Chacko, aged 31, the new editor of the Morning Star.

Ben Chacko has been appointed the editor of the Morning Star making him the youngest editor of the co-operatively owned socialist daily newspaper since the legendary William Rust in 1930.

Ben, who 31, has been active on the left since his teenage years — when he edited Young Communist League magazine Challenge and later represented fellow students on the student union council at Oxford, where he studied Chinese. He lived in China for several years before joining the daily paper of the left in 2010.

Bob Oram, chair of the People’s Press Printing Society management committee which appoints the editor, said he was “Proud to have been part of such a historic announcement. The future of our paper is in great hands.”

TUC general secretary Frances O’Grady stressed the unique role of the paper in the labour movement.

“The Morning Star has consistently championed the cause of working people and has done a terrific job in exposing the devastating impact of cuts and inequality,” she said.

“The paper is essential reading for many union activists, breaking stories often not covered by the corporate media.

“Congratulations to Ben on his appointment. He is taking over at a critical time for workers and their unions but I’m sure it is a job he will relish.”

Left Labour MP Jeremy Corbyn called the paper “the most precious and only voice we have in the daily media”.

Ben Chacko said it was an “enormous privilege to be appointed editor of the Morning Star in its 85th year.

“This is a make or break moment — how the labour movement responds to a Tory government determined to permanently abolish the welfare state and cripple trade unions for good will be crucial.

“I want to put the Star at the heart of the debate about how our class can start winning.”