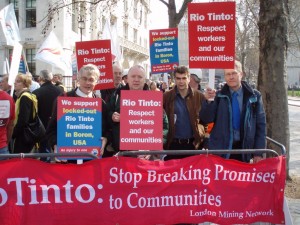 Following the recent demonstration at the Rio Tinto AGM in London, reported by Left Foot Forward last week, the United Steelworkers in Canada have lodged a formal complaint to the London Olympics Organising Committee about the activities of the extraction multinational, who are supplying the medals for victorious athletes at this summer’s games in London.

United Steelworkers have had 800 members locked out in a Rio Tinto aluminium smelting plant in Alama, Canada since last December.

With operating profits of more than $33bn in the past two years, Rio Tinto wants to hire new smelter workers in Alma as unionised workers retire, halving current wage levels and providing next to no benefits.

When the Canadian workforce turned the proposal down, the company locked them out, refusing to bring them back for the past four months.

According to United Steelworkers’ Canadian National Director Ken Neumann, the complaint argues that Rio Tinto’s actions violate the Games’ ethical procurement standards because they amount to an illegally declared lockout and significant violations of workers’ health and safety, with the company shirking its obligations by subcontracting out work to low-paid workers and paying wages and benefits below industry benchmark standards.

The letter of complaint then requests that the Olympic organisers follow their own ethical guidelines and remove Rio Tinto as a supplier.

The campaign against Rio Tinto’s involvement in the games is backed by Unite, USW’s partner union in the global union Workers Uniting as well as unions worldwide. USW is also backed by former Olympian and honorary Canadian Olympic Committee member Bruce Kidd, professor of Kinesiology and Physical Education at the University of Toronto, who said that Rio Tinto, in locking out its workers, “contradicts everything the Olympics stands for”.

The company, he insisted, should not be allowed to benefit by its association with the solidarity and fair play of the world’s top amateur athletics event.

Robert Gagnon, a smelter worker and member of Steelworkers Local 9490 in Alma, Quebec, said: “Rio Tinto is offering wages at a profitable plant that are not even enough to raise a family or support our children to follow their dreams. The idea that this company should be an Olympic supplier would be laughable if it weren’t so sad for our community.”

In the words of Craig Jones, a third-generation miner from Kennecott, Utah, where the metal for the Olympic medals will be mined: “As miners, we are proud of the metals we produce, but they are tarnished by the unfair treatment of workers in Quebec and Rio Tinto’s practices throughout the world. This company isn’t living up to Olympic ideals of fairness and solidarity, so we want the medals recast using a supplier that does.”