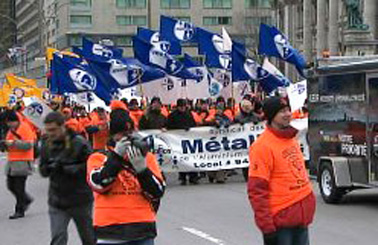 Locked-out members of Syndicat des Métallos  d’Alma Local 9490, the United Steelworkers (USW), took their fight against Rio Tinto Alcan to Québec’s largest city, last Friday, 17th February, where Alcan CEO Jacynth Côté was part of a spurious forum on youth in employment, sponsored by the Board of Trade Metropolitan Montréal. Some 200 of 780 metalworkers from Rio Tinto Alcan’s Alma aluminium smelter in the Saguenay-lac-Saint-Jean region, Québec, boarded buses and travelled 460 kilometres to Montréal for a noisy protest at this business luncheon, their first manifestation away from the 488,000-tonne-per-year smelter. They were joined by another 100 steelworkers from Montréal, and some 100 college students who joined the USW rally in mocking protest to a future youth theme that now sees business teaming with the Liberal provincial government of Québec to raise their university tuition fees.

This “Hot Issues@Lunch” theme was billed to “foster the success of the next generation of Québecers.”  The Syndicat des Métallos d’Alma found deep irony in Jacynth Côté participating, since Rio Tinto Alcan in Alma is using a lock-out to replace C$36-an-hour permanent jobs with outsourced and presumably younger workers at C$16-an-hour.

Côté was not expected to address the lockout at the hot-plate lunch, but when pressed by reporters on the sidelines, she called the dispute a “regional issue” and “it will be settled in Saguenay-lac-Saint-Jean” by managers who “have my full confidence.”

Earlier last week, when the lockout entered week seven and with the remote mining and manufacturing region starting to feel the economic effects of a lost wage base, one such manager told Reuters he “wouldn’t put a timeline to (talks restarting) right now because nothing is scheduled.”

With aluminium prices hovering now at very low, the Alma lockout serves as a convenient strategy to restrict supply to lift prices. It also fits Rio Tinto’s strategy of divesting and devaluing Alcan by C$8.9 billion in view of its US$39 billion purchase of the Canadian company in 2007, although the modern and high-tech tooled Alma smelter, with its low-cost hydroelectric supply, will not likely be jettisoned.

Perhaps this should have been a more apt business theme to the Board of Trade elite last week, and it certainly best explains the anger of metalworkers and students alike gathered on the other side of the barricades. In this vein – with Rio Tinto’s share price dropping – it is worth mentioning that Côté herself exhibited a timely corporate mentality last week by shedding 3,671 shares of Rio Tinto to pocket US$213,500, money not likely to find its way to Saguenay-lac-Saint-Jean.

USW District Five Director Daniel Roy addressed the disparity between full-time, family-supporting jobs in the region to the sub-contract and lower-wage jobs that Rio Tinto is trying create with the. “Accepting this would cause a dramatic downward spiral not only for the workers but for members of the community, which would see income, local business sales and tax revenues drop precipitously.”

USW Local 9490 President Marc Maltais added, “By using subcontractors to do the work of union members, we are asked to concede on behalf of future generations. This is an attack on our children and grandchildren.”

The buses departed Montréal late on Friday afternoon for the return trip to Alma, but first stopped at a plant-gate demonstration in Sorel, Québec, where workers and members of ICEM-affiliated FIM-CSN (Confédération des Syndicats Nationaux) at a Rio Tinto Iron and Titanium metal powders plant lent their support. This stop again depicts the long-erected barriers between Canadian trade unions that Local 9490 is erasing inside this lockout.

With Canada currently undergoing an unprecedented rash of corporate hostility, it is notable to witness trade unions and other groups galvanising behind victimised union workers.

On 8th February, the Communications, Energy, Paperworkers (CEP) Union of Canada contributed C$25,000 to the Alma metalworkers, and a day later the Canadian Union of Public Employees (CUPE) contributed C$10,000. And there has been more.

On March 31st, a day after the ICEM North American region meets in Alma, a manifestation will occur there with scores of global trade union leaders attending. And on 1 April, a workshop will occur in Alma to verse an exact fightback strategy against Rio Tinto on the global level.

Sent to PIAU by Dick Blin at the ICEM