Letter From Ann Field In Morning Star On Wapping Dispute 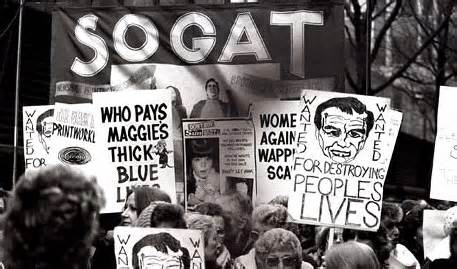 The following letter from Ann Field, former GPMU-Amicus National Officer was published by the Morning Star in response to recent articles on the News International (Wapping) Dispute.

In a monumental conspiracy involving the company and the right-wing leadership of the electricians’ union, supported by the Tory government, the police and the anti-union laws, almost the entire workforce was sacked within minutes of beginning a strike to defend their jobs, conditions and trade union rights.

5500 printworkers lost their jobs in January 1986 and suffered hugely, losing their livelihoods, their community and bearing physical attacks by mounted and riot police week after week at Wapping until February 1987.

The second root cause is the ability of a company or individual to amass huge portions of press and media in the UK. Murdoch’s domination has resulted in enormous and malign influence over politicians and opinion.

Irrespective of the advancing years of the man himself, News Corp is a trans-national company extending its commercial power into education as well as newspapers, media, sport and film. Murdoch’s News Corp is not the only company monopolizing the media, but is certainly among the most malign.

A management that was prepared to stop at nothing to destroy its own workforce and union organization would use any means to achieve its objectives whether it’s maligning people in their death throes or phone hacking, These two points should have been mentioned.