Len McCluskey is on your side – Get The Vote Out! 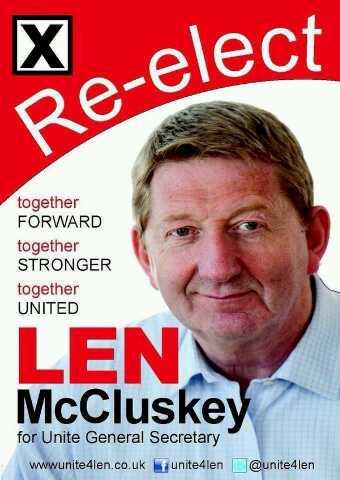 Len McCluskey has secured almost 1100 nominations in his campaign to be re-elected Unite General Secretary.

The nominations come from every region of Unite and from every one of Unite’s sectors.

This shows the confidence our membership and our union reps have in Len’s leadership and the progressive policies that he has established and are our now in place.

During the past few weeks Len has attended rallies and meetings across the country explaining the policies that have transformed and unified Unite.

In the past 12 months Unite has increased membership by well over 50,000 members, the majority of them in manufacturing through the 100% campaign.

Unite has become a union that stands up for its members – no matter who you are, whether you work in a small business, a privately owned company, the public sector or a mulit-national – Len McCluskey is on your side helping to fight for better pay, better conditions, secure jobs and better skills and training.

Manufacturing is now back on the top of the agenda. Many of Unite’s policies, promoted and supported by Len McCluskey, are now becoming Labour party policy. The need to intervene, invest and grow manufacturing is now part of the alternative economic strategy – an alternative to stagnation and a debilitating and draining recession.

To those who say we should cut our ties with Labour, ask them how else will we secure a manufacturing strategy which will grow the economy and influence the future – for all of our members. How will we campaign get our young people into decent jobs and apprenticeships?

Ask Unite members employed at London Taxi International, who saved their factory through the campaigning influence of not only of Unite – but by working with Labour MPs.

During the past few weeks Len has explained the vision for the future of our union – a union that is fighting for members and growing again, reaching out beyond the workplace to the community.

There have been no undeliverable promises or half-baked ideas masquerading as policy. There has been no harking back to old structures with no future or place in a modern, fighting and campaigning union.

Over the coming weeks Len McCluskey will be meeting members and union reps across the UK and Ireland, putting the case for his re-election.

Along with all the National Officers working in Manufacturing, I will be supporting Len, and campaigning to win every vote in the election.

We need to ensure we get the vote out. We need to get every member to vote for the future and vote for for Len. @Unite4Len

2 Responses to Len McCluskey is on your side – Get The Vote Out!