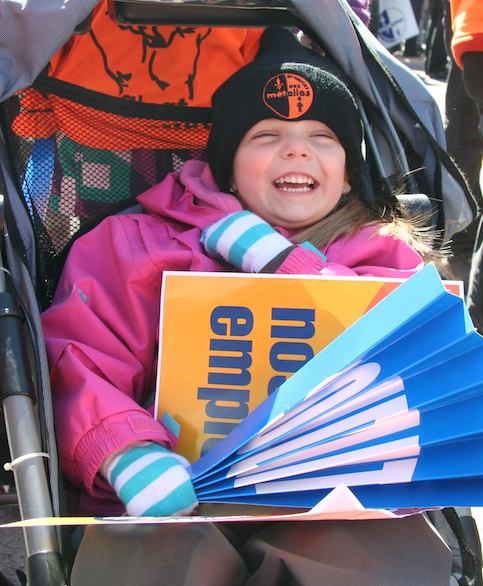 “We faced the third-largest mining company in the world and we won,” – Leo Gerard, the international president of the United Steelworkers.

The United Steelworkers (USW) and its global allies are hailing the end of Rio Tinto’s six-month lockout of aluminum smelter workers in Alma, Quebec, as a great victory for the workers and their supporters around the world.

A collective agreement that will run to the end of 2015 was ratified Thursday by USW Local 9490 members by a wide margin. The ratification brings an end to the lockout of 780 Steelworkers imposed by Rio Tinto Alcan in late December.

The Alma Steelworkers are expected to return to work on an incremental basis over the next several weeks.

“We were forced to take on the third-largest mining company in the world and we won,” said USW President Leo Gerard. “Many thought this was impossible, given the power imbalance, but we sent a message to the resource industry throughout the world that workers and their unions can take on huge multinational corporations to stop unjust demands.”

“The key to victory was the enormous solidarity shown by our members in Quebec who inspired trade unions across the globe to support them,” said Daniel Roy, USW Quebec Director.

“After union members around the world learned that our members were selflessly fighting to protect their community and future generations of workers, support and funds came pouring in,” Roy said.

“It began in the small town of Alma, but it became a defining labour struggle in Quebec, Canada, and around the world,” Maltais said. “Our members are walking back into the plant as heroes.”

“As they return to their jobs, our members will work to rebuild our relationship with Rio Tinto management,” said Ken Neumann, USW Canadian National Director.

“The USW will continue working with unions around the world to demand that Rio Tinto respect workers’ and human rights and the environment,” Neumann added. “We know there will be new attacks by Rio Tinto on trade unions and communities. The Steelworkers will be there to help them resist Rio Tinto’s assaults.”

The Alma workers were locked out in late December 2011, after they refused to accept Rio Tinto’s demand that retiring employees be replaced by non-union contract workers earning half the wages and no pensions or benefits. The USW maintained Rio Tinto’s plan was to increase profits at the expense of young workers and the community.

The new contract rejects Rio Tinto’s demand. Contracting out will be strictly managed and limited for the collective agreement’s duration, up to December 31st, 2015.

Throughout the lockout, the Quebec Steelworkers worked closely with the Quebec Federation of Labour to build public support and to expose a secret deal between Rio Tinto and publicly owned Quebec Hydro.

The secret deal allowed Rio Tinto to sell the Alma smelter’s unused electricity back to Quebec Hydro, for up to $15 million per month. In effect, Quebeckers were forced to finance Rio Tinto’s attack on Quebec workers. The secret deal remains a major political controversy in Quebec.

Quebec Steelworkers Marc Maltais and Guy Farrell travelled the globe to build support for the Alma workers and develop a dynamic international campaign. On March 31st, 8,000 union members from Canada, the U.S., Europe, Africa and Australia attended a historic rally in Alma.

A key component of the global campaign against Rio Tinto was to expose the company’s hypocrisy as official supplier of the metal used to make 4,700 Olympic medals for the 2012 London Summer Games.

The London Games promised to be the greenest and most sustainable Olympics ever. But these principles were contradicted by the official designation granted Rio Tinto, given the company’s long record of alleged labour and human rights abuses and environmental destruction. 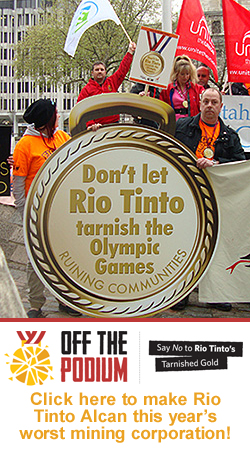 Fifty national trade unions in 37 countries sent letters to their respective Olympic committees asking that Rio Tinto be taken off the Olympic podium. Demonstrations were held in several nations on three continents, including theSwitzerland headquarters of the International Olympic Committee.

USW Local 392 in Utah, whose members mined the metal for the Olympic medals, also demanded that Rio Tinto be taken off the podium.

Major support came from Unite, the largest private-sector union in the United Kingdom. Unite, which joined forces with the USW to create Workers Uniting, the first global union, became the face of the campaign with the London Olympics.

The USW is working closely with the CFMEU, IndustriALL and non-governmental organizations to build a strong global network seeking to change Rio Tinto’s destructive practices.

The public is urged to vote at www.greenwashgold.org to denounce Rio Tinto’s deplorable record and to support the Off The Podium campaign against Rio Tinto at www.offthepodium.org.

For more information, see www.justiceforriotintoworkers.ca in English and www.solidaritealma.org (in French).