Labour Will Be On The Side Of Workers – Laura Pidcock MP

By Laura Pidcock Shadow Secretary of State for Employment Rights 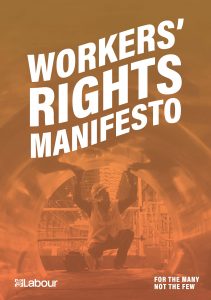 “So many people’s working lives are dominated by low pay, insecurity and powerlessness. It is a sign of this broken system that many people – and not just the lowest earners – are forced to top up their monthly wage with debt, just to cover their living costs.

As our economy has flatlined under the Tories, wages have stagnated. People are, on average, paid less that they were 10 years ago. This is a scandal that must end. The Labour Party is the only party that is committed to eradicating in-work poverty within the next Parliament.

People spend so much of their time at work and that time should not be characterised by worry and fear. As a government,  Labour will be on the side of workers the good employer and the trade unionist, while putting exploitative employers on notice.

Labour’s transformative ransformative programme for workers would give them real power, real respect and dignity, while changing the culture of work in this nation. By breathing hope into workplaces across Britain, we can achieve real change.