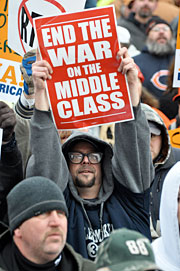 A US judge has issued a temporary restraining order blocking the implementation of the bill that strips hundreds of thousands of hard working Wisconsin public sector workers of collective bargaining rights.

“Today justice prevailed,” explained Stephanie Bloomingdale, Secretary-Treasurer of the Wisconsin State AFL-CIO. “In Wisconsin and in America, we have a democratic process for passing legislation. Judge Sumi has ruled that Scott Walker’s underhanded attempts to harm Wisconsin’s middle class will not stand.”

“State employees believe that nobody is above the law. We are gratified to see some of our so-called ‘leaders’ finally held accountable for their illegal actions. They may think they can get away with ignoring the vast majority of Wisconsin citizens by attacking worker freedoms, but they simply cannot continue ignoring the law if we want to continue calling our state a democracy,” said Marty Beil, executive director of the Wisconsin State Employees Union, AFSCME Council 24. 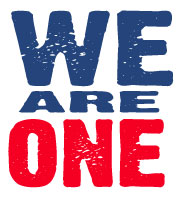 Meanwhile the AFL-CIO are reporting an upsurge in union membership following weeks of pro-union demonstrations in Madison and elsewhere in the USA.

Walker’s attack on workers’ rights is building support for workers’ rights. Amanda Terkel at The Huffington Post reports today that after Walker zeroed in on workers’ collective bargaining rights, more than 20,000 Wisconsinites have joined Working America, the AFL-CIO’s community affiliate for people without a union. Also, faculty members at two University of Wisconsin (UW) campuses have voted to join AFT-Wisconsin. One union leader tells Terkel: “The increase in Working America numbers provides one of the first real-world examples of what we’ve seen, which is increased interest nationally and in Wisconsin of supporting workers’ rights”.

Working America organiser Kevin Pape says people continually approached Working America members – easily spotted in their red T-shirts – at the rallies and marches protesting Walker’s attacks. He tells Terkel: “People are just thirsty for a connection to a labour movement. This is an avenue to join the labour movement, and they’re just jumping at it”. She also reports that the growing interest in joining the union movement has also been seen at Working America’s door-to-door communications.

Along with the growth in Working America, the backlash against Walker’s attack on middle-class jobs can be seen in two recent union elections at UW campuses. Just hours before the Wisconsin state Senate last week approved Walker’s bill to eliminate collective bargaining for public service workers, the faculty at the UW-Stout voted overwhelmingly – 196 31—in favour of union representation through AFT-Wisconsin.