The latest estimate for Britain’s GDP growth in the 3rd quarter of 2012 left the initial estimate unchanged with growth of 1% in the quarter.

Boosted by a series of special factors to do with the prior Jubilee holiday, the Olympics and other events, most forecasts suggest that this will give way to much slower growth in the 4th quarter. There are even forecasts that there will be a ‘triple-dip’ with growth contracting once more at the end of the year. In reality the overall situation is better characterised as stagnation, with growth fluctuating around zero.

The source of the current crisis is becoming ever more apparent. As the chart in Fig.1 below shows GDP has fallen by £47bn in real terms from its peak in the 1st quarter of 2008 to the 3rd quarter of 2012. Over the same period investment (Gross Fixed Capital Formation) has fallen by £49bn. That is to say the fall in investment is now greater than the entire fall in economic activity.

Of the other components of GDP only the fall in household consumption comes close to matching the negative impact of declining investment. Consumption fell by £37bn over the same period. 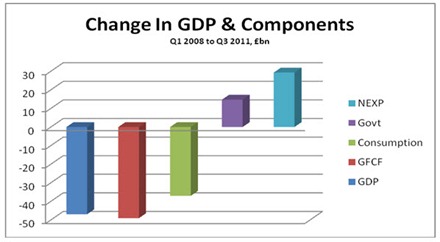 By contrast government current spending rose by £14.7bn over the period, while net exports rose by £29.3bn. The rise in net exports is almost wholly attributable to a slump in imports as exports have barely increased. Imports have fallen by £19.1bn.

Without the detail provided in the third and final estimate of GDP it is not possible to determine the source of the slump in investment. It is possible that the public or private sector which is responsible. But SEB has previously shown that the entire second recession was caused by the decline in public sector investment and this is in line with the stated plans of the Coalition government to sharply reduce its own investment.

This highlights an important point. Governments across the OECD have increased their current spending in the crisis. According to the OECD government current spending is up from 19% of GDP on average to 22%. This covers government expenditure on areas such as pensions, unemployment and incapacity-related benefits, health, housing supports and other social policy areas. In some cases the efforts to limit these outlays have been severe, but the growth of unemployment and poverty has automatically pushed them higher.

However OECD governments have tended to sharply reduce government investment. In Britain and elsewhere this is highly damaging to growth and therefore has a negative impact on government finances.

But growth and improving government finances are not the aim of ‘austerity’ policies. Their aim is to restore the profit rate of the private sector and removing government from productive areas of the economy is a step towards that.

Republished from the Socialist Economic Bulletin – with permission.