Bloggers Of The World Unite: ‘Stop The Net Grab’ 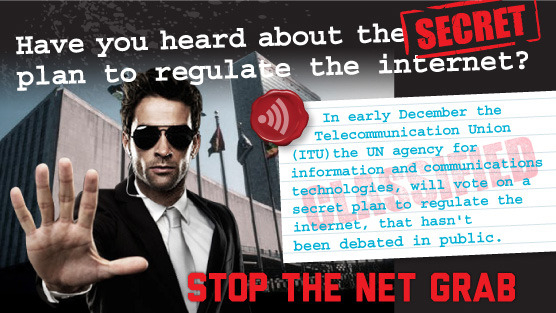 The International Trade Union Confederation (ITUC) is today (November 12th) launching a major new campaign to stop an attempt by the International Telecommunications Union (which is not a trade union but a UN body) to control the internet today.

The proposals to regulate the internet are to be discussed in Dubai next month.

Sharan Burrow General Secretary of the ITUC will launch ‘Stop The Net Grab’ alongside Paul Twomey, the ex-head of the ‘Internet Corporation For Assigned Names and Numbers’, the body which co-ordinates the allocation of internet addresses worldwide. Joining them via a video link from California will be Dr Vint Cerf who was one of the people behind the invention of the internet in the 1970s.

The ITU is a UN body, set up to regulate telegrams – and later telephones and faxes. A coalition of countries including China, Russia and Iran is now seeking to give the ITU and ultimately individual governments, the power to control internet use, regulating not just the network infrastructure, but the internet uses people and organisations are allowed to make.

“We tend to take the internet for granted as a tool for solidarity, not least when it comes to people seeking justice where union rights and other freedoms are repressed.  In places where being seen to talk with a union organiser can cost your job, or worse, the net often provides a form of sanctuary where despite censorship and monitoring, people can still keep in touch and organise.  Tens of thousands of unionists, through their own unions and as individuals engaged in campaigns, rely on the internet as a channel for global solidarity.  Companies and governments alike know that abuses of labour rights are only a few keyboard clicks away from exposure and global pressure.

This is about to change for the worse if a group of countries, led by China, Saudi Arabia, Iran and the like, get their way at an obscure but vitally important meeting in Dubai this December.

They have managed to get the International Telecommunication Union (ITU), a UN body for technical standards for telephone and fax, to try and extend its powers to the internet. That could lead to some truly creepy language becoming international law.

Governments would have to ensure that the internet is used for ‘rational purposes’ whatever on earth that might mean.  It would require that the internet not be used to ‘interfere in the internal affairs’ of countries, and would allow governments to require other countries to monitor internet traffic on their behalf. The net activism that underpinned the Arab Spring will be a whole lot harder if governments sleep-walk their way into accepting the ITU proposals.

And in a Dubai double-whammy, a group of telecoms companies, mostly from Europe, have got the ITU to back a new pricing model which would increase costs for users and slow down internet growth in poorer countries.

The whole process has been shrouded in secrecy, with the ITU only publishing its draft ‘International Telecommunication Regulations’ after outside pressure.  Net-censorship governments are still blocking the ITU from publishing the extra changes they will be seeking in Dubai.

The evolution of the internet is a core issue for unions – as a space for democratic struggle, and because of its huge impacts on workers across all sectors.  The international union movement is calling for an open and transparent process to examine these issues, one where workers actually have a voice and their unions can help shape changes.  Bodies like the global Internet Governance Forum could provide a far better alternative than what is on the table (as far as anyone can tell) for Dubai.

The ITUC and Greenpeace have written jointly to UN Secretary General Ban Ki-moon to express concern, and many human rights and other civil society groups are deeply critical of the ITU proposals.

Saudi Arabian bloggers will still spend as much time dodging the feared security apparatus as they do actually blogging on official corruption and criminality.  ‘The Great Firewall Of China’ will likely stay in place for a while to come. But there is no way on earth that governments should allow the UN system to give legitimacy to the self-interest of repressive regimes, nor allow the launch of a gradual fragmentation of the internet.”

In addition, the proposals could be used to restrict trade unions using social media from organising and building union membership. No attempt has been made by the ITU or most Governments to discuss the proposals with unions representing workers in the communications,  telecoms, internet , media industries and journalists.

Unlike many other UN decisions, member states have no veto, so if the coalition of the states behind many of the proposals gets its way, the regulations will have to change for everyone.

Backing the campaign the TUC’s Brendan Barber said: ‘These decisions will have a huge impact on freedoms and the everyday use of the internet that people take for granted, and most people would be shocked to know that something so major could be happening amongst such secrecy. The issues need to debated in the light of day and in detail, not rushed through without consultation by a shady coalition of oppressive regimes and vested corporate interests.’

To support the campaign click on the graphic or the link above.