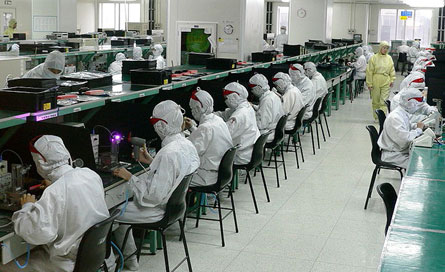 A Foxconn factory in Shenze, China

The International Metalworkers Federation, has, with other trade union, labour and consumer groups called on computer giant Apple to give workers a voice in their future and demanded  more information about the factories where its components are made.

Unions and NGOs called on Apple to rely on workers to monitor the labour conditions in the manufacture of its products, not a top-down auditing approach.

“Give Apple workers a voice in their future“, the joint statement from International Metalworkers’ Federation (IMF), International Trade Union Confederation (ITUC), Good Electronics, MakeITFair and Students & Scholars Against Corporate Misbehaviour (SACOM) was released in anticipation of the likely publishing of results in the next few days by the Fair Labour Association (FLA) of the audit it is conducting in one of Apple’s final assembly suppliers, Foxconn.

“Once the audits are over and FLA has gone home, the workers in the factories will again be left to deal with the brutal labour conditions that are imposed on them,” reads the statement.

“It is the workers themselves who are in the best position to monitor whether their labour rights are being respected and to push for remedies when they are not.”

The unions and NGOs argue that Apple must allow workers to conduct elections to democratically elect their own representatives in the workplace who can negotiate with management on the pay and conditions of the workforce, which are fundamental rights recognized by the International Labour Organization.

Apple and Foxconn must immediately establish a schedule of negotiations which will lead to a genuine collective agreement that covers all aspects of work including wages and working hours, overtime, and health and safety.

Also the outside scrutiny of working conditions in Apple’s supply chains is urgent and will need to continue for the foreseeable future. For this to be possible, Apple must be more forthcoming about the identity of its suppliers, not just releasing the company names, but the countries and factories in which all the components that go into its products are made.

A copy of “Give Apple workers a voice in their future“, the joint statement can be seen here.

For more information and reading on this issue and a copy of a letter sent to the CEO of Apple click here.

Thnaks to Anita Gardner at the IMF