As manufacturing companies have restructured and extended their reach to every corner of the globe, trade unions have had to respond. Many unions in the UK affiliate to one or more of the Global Union Federations (known in the trade as GUF’s!).  Some of the names may be familiar to readers of this blog: the International Metal Workers (the IMF – or as we know it “the good IMF’); the International Chemical Workers (ICEM); Uni Global Network covering services and industries such as graphical and IT; the International Transport Federation (ITF) – and there are others covering food and hospitality, building and construction, public services,  education and  journalists.

One of the key problems in the past is that a number of the GUF’s duplicated each others work. They also face rising costs and many small unions notably in developing countries rely on them to provide education, training and support – but the GUFs have ever dwindling resources.

There was also big question marks as to wether these global behemoths were really relevant to ordinary members working in a factory, a plant, a mine or office. Time and events including the inexhorable rise of multi-nationals were passing them by.

In today’s globalised world a number of forward thinking unions recognised there needed to be a re-think – a rationalisation of the GUF’s in order to make them more effective, and relevant to ordinary workers across the world. Resources needed to be harnessed to best effect by reducing duplication and providing support to all unions facing attacks from employers – notably those global companies where co-ordiation was activity is so important.

Global companies have businesses, sites, plant, offices and outlets in every nook and cranny of the globe and they operate differently in different regions. In the USA for instance some European companies behave in a way that would just not be possible back home because of legislation and the strength of trade unions would stop them.

Then there is the problem of the emerging giant economies including China, India and South Asia, with low levels of independent trade union organisation. Its is clear that the time had come for a complete re-think and restructure.

Unite and our sister union in Workers Uniting, the United Steelworkers play a major role in some of the main GUF’s. And before you ask – whilst the GUFs are ‘federations of unions’ Workers Uniting is an independent trade union with workers employed in similar or the same global corporations in the UK, Ireland, USA and Canada.

Two weeks ago trade unions from around the world agreed to form the IndustriALL Global Union. The new global union will represent workers in manufacturing and industrial sectors at the global level.

The meeting at the International Labour Organization in Geneva unions, finally bit the bullet. The purpose was and is to build greater strength, a greater capacity to organise and to build union power across manufacturing, industry and the supply chain.

The new GUF will be known as IndustriALL Global Union and will represent workers from extraction of oil and gas, mining, power generation and distribution, manufacturing of metals and metal products, shipbuilding, automotive, aerospace, mechanical engineering, electronics, chemicals, IT, rubber, pulp and paper, building materials, textiles, garments, leather and footwear and environmental services.

Putting the final touches to the rules, statutes and agreeing the legal paper work the joint Executives of the three GUFs had to agree to a new name and logo. Unite and the USW proposed and voted for new name IndustriALL.

The founding Congress of the new organisation will take place in Copenhagen in June. 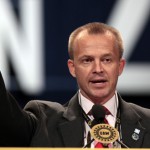 Despite trying, PIAU can’t be the first to publish the new snappy, modernist logo to go with this blog. The new General Secretary of  IndustiAll Jyrki Raina, says it needs tweaking – so its wait and see.

In the meantime watch the video to learn more about IndustriALL – a new global union for a new era.