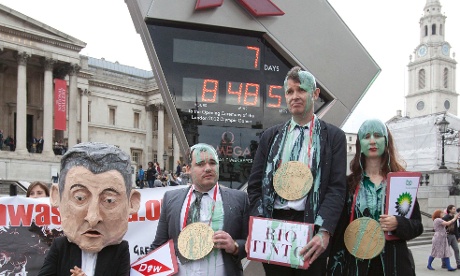 Sent in by Joe Drexler of the United Steelworkers

Three people pretending to be corporate representatives from BP, Dow and Rio Tinto were awarded gold medals for being the worst corporate sponsors of the Olympics, before having small quantities of green custard poured over their heads.

The good-natured performance took about 15 minutes and was clearly amusing a number of passers by.

After the ceremony was over and the performers were packing up, about 25 police officers arrived and arrested six people, including the three corporate representatives and people who were mopping up the small amounts of custard on the ground with paper towels.

When confronted, the police officers alleged that ‘criminal damage’ had been done by custard falling on to the stone surface of Trafalgar Square.

Before the arrested were even driven away, the controversial custard had been completely cleaned up leaving no trace whatsoever.

The United Steelworkers supported by Unite and many other trade unions worldwide  ran a successful campaign to get Rio Tinto to end a six month lock-out at their aluminium smelter in Alma. Canada. Click here for more information.