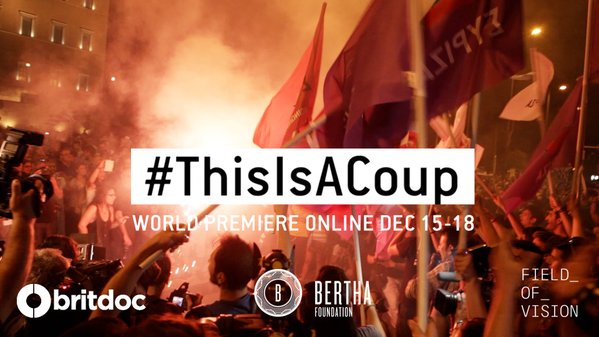 With the clash with the lenders on hold, some Greeks take to the streets to organize resistance. As the crunch looms, Tsipras predicts they will run out of money by the end of May. Almost on cue, Syriza defaults on its debt to the IMF and the “rupture” begins.

#ThisIsACoup – Episode Two: To Pay or Not To Pay?

The crunch is here. A new bank run is draining the banks, while the state is almost out of cash. Against all odds Tsipras wins a crushing referendum victory, but as they celebrate, finance minister Varoufakis is sacked. What will Tsipras do next?

#ThisIsACoup – Episode Three: OXI – The Greek Word for “No”

Despite a historic twitter protest involving up to a billion people, a new austerity deal is signed. In an exclusive first English interview since the climb-down Tsipras gives his own explanation of why things went wrong.

Theopi Skarlatos talks with Eric Hynes about her four-part series for Field of Vision, which examines life under austerity in Greece, the country’s confrontation with the EU, and the emotional turmoil accompanying political change.

Recounting the moment last January when the leftist Syriza party was elected to power in Greece, Paul Mason said, “I knew it would be the most important political crisis of my life.”