German lessons for the UK economy 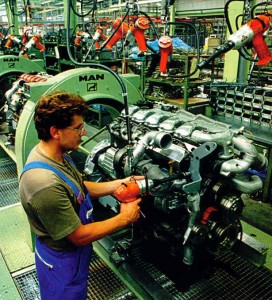 The UK needs a new manufacturing eco-system, bringing together policies on skills, procurement, growing small firms and identifying strategic sectors, if we are to rebalance the economy and compete in the global age – so says a new report by the TUC.

The report ‘German Lessons’ is a new major study which looks at what the UK can learn from Germany, the most successful manufacturing nation in Europe. The study and report was carried out with the support of Unite and IG Metall in Germany.

‘German Lessons’ calls for an economic model that is widely seen as fair among employers and trade unions.

It’s hard to imagine Germany putting up with the social divisions that the UK has endured since the 1980s. The study also calls for a major role for strong, well-organised trade unions and strong employers’ organisations.

In Germany, strong unions were able to support both their companies and their members when it mattered most – during the worst economic crisis since the 1930s.

If relationships are tested most in times of difficulty, the relationship between German manufacturing companies and their unions including IG Metall passed the test with flying colours.

The report echoes Unite’s campaign for manufacturing contained in its policy document ‘2020 Vision’ for UK to specialise in a number of targeted, high skill, high value manufacturing sectors, rather than try to be a ‘jack of all trades, but master of none’.

We also need to support key industries in the context of tackling climate change and where small companies can grow into medium sized manufacturing companies, supplying large exporters and becoming a British version of the German ‘Mittelstand‘ they must be supported to do so through government policy.

Procurement policy must be guided by the principle that every pound of taxpayers’ money must contribute to jobs, skills and the strength of the British economy.

A procurement policy that is simply based on ‘cheap and cheerful’, lowest cost, offering nothing to the long-term development of the British economy, has no place if our industries are to reach new levels of competitiveness.

But as well as setting out policy details, ‘German Lessons’ shows what a positive attitude to manufacturing looks like.

None of the companies the TUC interviewed feared the growth of the BRIC countries especially the powerhouses of China and India.

Instead, they saw it as an opportunity for their businesses.

Of course, those new markets require tough decisions about future investment, but trade union members on works councils in Germany fight hard to defend their members at home, while also supporting their companies growth.

There has been a lot of talk in by the Government about rebalancing the economy.

British manufacturing has fallen more sharply than its competitors.

That didn’t happen by accident, it was allowed to happen by those in charge. It is time to turn the tide. We can’t do it quickly, and it won’t be easy, but the prize is worth it.

The government, and indeed the Labour opposition, should hear this message.

This blog also appeared on Left Foot Forward and The Manufacturer.