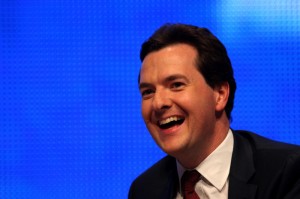 Better than expected, George Osborne said this week’s growth figures were. Who is he trying to kid?

The UK limped through the last quarter, struggling to hit the almost invisible 0.2 percent which kept the Chancellor just on the right side of blush-sparing. But not only has he fallen someway short of his own target for this year, a quick look behind the headlines and it is not hard to see that the nation’s hopes of fighting our way out of this recession are receding too.

Manufacturing fared particularly badly this quarter. It ought to be the engine of our economy – but we are running on empty. With the right levers pulled and an intelligent driver at the wheel, it should also be the way we get the UK’s show back on the road becoming the high-tech nation with stable, fairly rewarded jobs that can support the services needed by a modern day country.

Manufacturing ought to be powering us out of the recession and positioning us as a country that will not be eclipsed by the BRICs. Not in Cameron’s Britain it isn’t. George Osborne’s policies remind manufacturing workers of those of Mr. Micawber – he is hoping something will, eventually, turn up.

In June this year, UK manufacturing sector growth fell to its lowest rate for 21 months as new export orders declined.

In a survey undertaken earlier this year by IMechE less than a quarter of 1000 manufacturers surveyed thought the coalition’s policies were not helping manufacturers. This was further supported by a survey conducted by Works Management whose survey in May 2011 reported: “The coalition was accused of lacking the desire, know-how or patience needed to boost manufacturing’s contribution to GDP, in a survey of nearly 170 site managers.”

Today manufacturing accounts for only about 12% of the UK’s Gross Domestic Product, compared to 47% for China, 25% for Germany, 24% for France, 23% for Japan and 22% for the United States.

And on the day when BP turns in a £3 billion profit generated by the highest oil prices for decades, energy cost hikes will have devastating impact on heavy energy intensive industries with future investment decisions being affected as to where products are made.

Yet manufacturing matters. It nurtures every part of the rest of the economy, supporting services, transport and retail. Typically in the car industry, for every one car worker four more jobs are created in the wider community. No other sector can both generate and spread wealth in this way.

But to thrive it needs both a vision and intervention. Labour came to this realisation belatedly but soon enough to bring Nissan investment to the north east. Now ex Labour ministers are saying they ought to have been more interventionist and that manufacturing can save the economy. The question is, will the Coalition listen?

Vince Cable is said, albeit reluctantly, to be coming around to the idea that, no, the market will not provide when it comes to investment, training and infrastructure. But if this is the case he better start signalling a new zeal for support soon because his lamentable record to date is putting businesses and jobs in peril. Great companies like Sheffield Forgemasters and Bombardier, UK-based manufacturing success stories who, when they asked for Coaltion government help were given the cold shoulder.

Last weekend, 10,000 people marched through the streets of Derby to call on the government to think again about its decision to award the Thameslink train contract to Seimens in Germany. Every single one of those people know that their community’s future is hard-wired to Bombardier’s future. The Coalition’s rejection of Bombardier is a rejection of Derby and of rail manufacturing in the nation which gave the world the train.

Against this backdrop it seems more and more that George Osborne is being left to his own devices, turning Number 11 into the mad scientist’s lab where he amputates the good parts of the economy (growth, public services) and transplants in some horrors (savage cuts).

As the turmoil in the US shows all too vividly, cuts alone cripple economies. David Cameron ought to tread carefully because this Russian roulette with the economy is being played on his watch, and it will be him, not the Chancellor, who will be remembered for doing to manufacturing businesses what Thatcher did to the mining communities – strangling them.

That is why Unite is calling for more a Government action and intervention – to tboost the UK’s manufacturing sector including:

A cut in VAT to boost domestic demand; better use of government procurement to boost manufacturing jobs, including urgent rethink on Thameslink contract; support for manufacturing companies on energy costs; better support for innovation and capital investment through improving access to bank funding and creation of Strategic Investment Bank and a skills strategy to foresatll the skills shortage even the Engineering Employers Federation says is looming.