Fighting Back : The BA Dispute

Fighting Back: resisting union-busting and strike-breaking in the BA dispute is a new IEPR booklet written by Professor Keith Ewing.

The booklet covers the history of the dispute from its inception to its conclusion with detailed insight and analysis of what really went on and the issues that lay behind the dispute which had huge implications for Unite and its Bassa members whose lives were turned upside down by the demands of the employer.

The nature of the dispute and the conduct of BA had massive implications for British trade unionism. The main problem highlighted by the dispute is the extent to which the law is tilted so heavily in favour of employers. 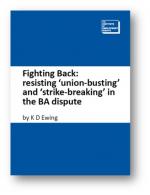 For a preview of this excellent publication visit the IPER website. You can also purchase your copy on line from the site – it is £8 well spent.