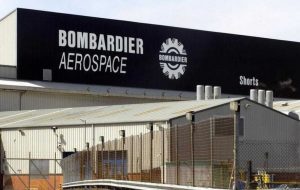 Workers to gather for union meetings between noon and 1.00pm on Thursday [January 18th] at gates of all five Bombardier sites

Unite Regional Secretary, Jackie Pollock, who will address workers at a gate meeting inside the main Bombardier site at Airport Road on Thursday coming said:

“Workers here are hugely concerned that 292% import duties on the C Series are likely to be rubber-stamped by the US International Trade Commission. This decision seems all the more likely given that the UK government last week effectively raised the white flag by announcing that they expected the tariffs would be imposed and placing their hopes in overturning them at the World Trade Organisation. That process is likely to take years – during which time the damage to jobs here in Northern Ireland will have been done.

“These tariffs effectively quadruple the price of the C Series in the US, shutting Bombardier out of the largest market globally for the aircraft. That poses an immediate and serious threat to every single job at Bombardier in Northern Ireland and by extension to those tens of thousands of workers in their supply chain and those who benefit from the boost wages provide our economy.

“To date the action taken by this government – a mere two calls by the Prime Minister to the US President – has been woefully inadequate. Inaction and supine pleading are completely unacceptable. The gate meetings on Thursday represent the next step in workers mobilising to defend Northern Ireland jobs”.

Unite regional officer with responsibility for the workforce at Bombardier, Susan Fitzgerald, will also address the gate meetings:

“Unite has organised these gate meetings as this is the eleventh hour for the workforce and so far we have seen only complete inaction and a total lack of urgency from government and our local political leaders on the threat to jobs.

“The ITC decision directly threatens more than four thousand workers and indirectly a further 20,000. Unite will not join the government in raising the white flag and resigning ourselves to defeat.

“We demand that the UK government plans now for all eventualities. They must use whatever power they have to force Boeing to withdraw their complaint, there doesn’t need to be single job loss for any worker in Boeing or Bombardier. We will continue to fight for the jobs, skills and future of our members and their families”, Ms Fitzgerald finished.

Media who wish to access the gate meeting at the main site will need access passes as it will be held on Bombardier grounds. We are asking for all media to contact Unite to arrange this through emailing our Belfast media account or leaving a phone message with Donal O’Cofaigh, Unite Campaigns & Communications (NI) on 07810 157926.