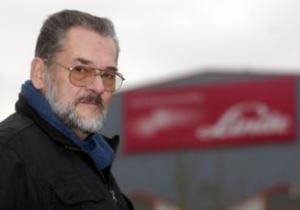 Peter Taylor was a long-time employee at Linde Materials Handling in Basingstoke. He was the Unite Convener, Joint Shop Stewards’ Committee chairman and is a Unite EC member. Here he gives a personal view on the demise of local production at Linde Material Handling in Basingstoke. The company which made fork-lift trucks and industrial vehicles finally closed at the end of 2010. Peter expresses the views that countless manufacturing and engineering workers hold as they watched skilled, well paid manufacturing jobs be transferred out of the UK.

“I worked at Linde Material Handling for 44 years. For 40 of those years, I was chairman of the Shop Stewards’ committee and a top union official at the factory.

I want to make it clear that in no way was the closure of production the fault of the workers or the union, and it’s fair to say, neither was it the fault of our factory management.

We had all worked very hard to make our factory the most productive and efficient producer of fork-lift and industrial trucks in the KION organisation, which employs more than 19,000 people worldwide.

Our industrial relations were second-to-none and my union never had an official strike in all those years.

Like the closure of Rover’s and Peugeot’s factories in the car industry, and many other factories in this country, we were closed because of the lack of a ‘level playing field.’ It’s a fact that it is so much easier and cheaper to close a British factory than factories in other European countries. This is as a result of the economics of the madhouse of successive British Governments who have, by and large, stood idly by and watched the continuous demise of the British engineering industry since the Second World War or throughout my whole lifetime.

This is in stark contrast to what has happened in other European countries. When, for instance, you travel around Germany, you still see many large engineering companies.

Neither was the factory closed due to our wages being too high. They were, in fact, less than the German factories where the bulk of the trucks are now being built.

A few years back, Linde sold their Fork-Lift Truck Division to the private equity companies, Goldman Sachs and KKR, who borrowed money from many banks for the purchase. When we entered the recession, the banks were obviously looking for cutbacks to ensure they eventually get their money back.

Why is it that European Governments and politicians are far more patriotic towards their industry and people than British Governments have been?

The 550 jobs we lost since December 2008 were value jobs. The wages and conditions people got for their skills and hard work were far better than people get in many other factory jobs in the UK.

While we negotiated a good closure package, those workers who are managing to get other jobs are receiving much lower wages and conditions than we had at Linde.

The high-productivity and efficiency, and the good wages and conditions that we achieved were due to the understanding, commonsense and co-operation of the workforce with the company, whose management in the final years were the best I had experienced in the 44 years that I worked there.

I cannot praise our union members enough for their dignity in how they dealt with the whole closure situation from June 2009 until December 2010, and that includes those who went to Germany and France to train the workers there, in extremely difficult circumstances, on what had been their jobs. They proved to be brilliant ambassadors for our factory and Britain.”

This article was published in This Is Hampshire on 5th February, 2011.