The European Trade Union Confederation (ETUC) and its six Hungarian member organisations (LIGA, ASZSZ, SZEF, ESZT, MSZosz and MOSz) have called  a Euro-demonstration today, 9th April in Budapest, where the European Economic and Financial Affairs Council (ECOFIN) will meet during the Hungarian presidency.

The European trade unions will be demonstrating against austerity measures and cuts and calling for support for social Europe, fair wages and decent jobs.

This is against a background of recent attacks on the long established EU social model by Governments and employers who are not only promoting cuts and austerity but changes to collective bargaining and employment protection as a way to rebuild economies hit had by the economic crisis and to promote the neo-liberal agenda that created the the problems in the first place.

The ETC has said: “The policies implemented by the European authorities and the national governments to deal with the ravages of the crisis are essentially based on austerity measures and fiscal consolidation plans that consist of sharp cuts in public spending, pressure exerted to reduce wages and to interfere with the independence of collective bargaining. These social regression measures are taken whilst scandalous bonuses continue to be paid. European trade unions are against these policy choices and have stated on many occasions that alternative choices were possible. This is why they will make their voice heard in the streets of Budapest on 9th April, because governing Europe does not mean social regression.”

This right ward, neo-liberal drift is now being bolstered by the IMF and the EU who are insisting on changes to employment protection and recently on collective agreements – through the s0-called ‘competitiveness pact’ in the EU – undermining social the gains of the last 60 years and playing into the hands of right-wing parties determined to turn the clock back as well as blocking further social progress and decent employment rights across the EU. 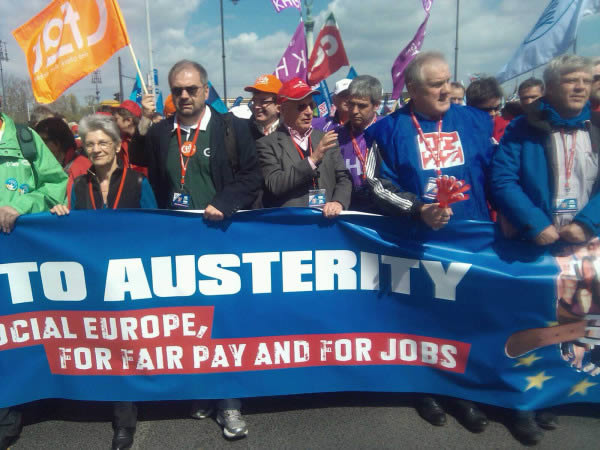