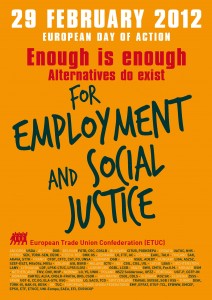 On the eve of the European Summit of 1st and 2nd March, dominated by the themes of austerity and budgetary discipline, the European Trade Union Confederation (ETUC) will send a clear message to the EU leaders: this imposed austerity is going to plunge Europe into a recession! ETUC members will mobilise on 29th February in the EU 27 countries and beyond to denounce and condemn this type of governance and to propose alternatives for employment and social justice.

The effects of the financial, economic and social crisis have reached unbearable levels in several countries. Faced with the extreme seriousness of the situation, European leaders are making the race for austerity their priority response.

The crisis serves as a ready-made pretext to attack the European social model, justify cuts in wages and public services, weaken social protection, make the labour market hyperflexible, and attack trade union rights. Thus, at a time when the European summit has to adopt a treaty plunging Europe into recession and job insecurity for the long haul, the European trade unions are saying “enough is enough” and putting employment, recovery, social justice and solidarity at the forefront of the discussions.

All EU countries (and others as well) will take part in ETUC’s European action day through demonstrations, work stoppage and information for workers in companies and governmental agencies. These actions, which will be covered by media campaigns, will be decentralised and conducted at the regional, national and cross-border level.

Bernadette Ségol, General Secretary of ETUC declared: “In mobilising on the same day everywhere in Europe for the first time, the European trade unions are reacting at the same level of their anger and exasperation in the face of injustice! We want to say it loud and clear, on the eve of an important European summit, that there are alternatives to this Europe without solidarity, without plans, without hope and without prospects.”