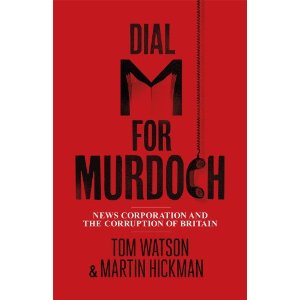 Tom Watson and Martin Hickman’s book uncovers the inner workings of one of the most powerful companies in the world; how it came to exert a poisonous, secretive influence on public life in the UK, how it used its huge power to bully, intimidate and cover up, and how its exposure has changed the way we look at our politicians, our police service and our press.

Rupert Murdoch’s newspapers had been hacking phones, blagging information and casually destroying people’s lives for years, but it was only after a trivial report about Prince William’s knee in 2005 that detectives stumbled on a criminal conspiracy.

A five-year cover-up then concealed and muddied the truth. ‘Dial M For Murdoch’ gives the first connected account of the extraordinary lengths to which the Murdochs’ News Corporation went to “put the problem in a box” (James Murdoch’s words), how its efforts to maintain and extend its power were aided by its political and police friends, and how it was finally exposed.

The book contains never been disclosed before in public, including the smears and threats against politicians, journalists and lawyers. It reveals the existence of brave insiders who pointed those pursuing the investigation towards pieces of secret information that cracked open the case. By contrast, many of the main players in the book are unsavoury, but by the end of it you have a clear idea of what they did.

Here is a taster:

Rebekah Brooks, the former chief executive of NI, was bugged in her own office shortly before she resigned last summer over the phone hacking of Milly Dowler, the murdered schoolgirl.

On his release from prison, Glenn Mulcaire, the convicted NOTW hacker, allegedly was contracted to give security advice to a private security company, Quest, whose chairman is Lord Stevens, a former Commissioner of the Metropolitan Police.

NI intermediaries approached Tom Watson with a “deal” to “give him” former NOTW editor and Downing Street press chief Andy Coulson but that Ms Brooks was “sacred”.

NI, which runs Mr Murdoch’s British newspapers, said it had no comment to make on the book.

At a packed press conference, Tom Watson, who is a member of the Culture, Media and Sport committee, said the claim that the NOTW set out in 2009 to undermine the MPs investigating it came from Neville Thurlbeck, the NOTW’s former chief reporter.

In the book, Thurlbeck, who has been arrested in connection with phone hacking, says: “An edict came down… and it was find out every single thing you can about every single member: who was gay, who had affairs, anything we can use.”

Tom Watson, who has received an apology from NI after he was placed under surveillance, said he believed the campaign was nonetheless successful and had contributed to a decision by the media committee not to demand that Ms Brooks give evidence to it in 2010. He said: “Parliament was, in effect, intimidated. News International thought they could do this, that they could get away with it, that no one could touch them; and they actually did it, and it worked.”

Labelling News Corp a “toxic institution”, he added: “We conclude that the web of influence which News Corporation spun in Britain, which effectively bent politicians, police and many others in public life to its will, amounted to a shadow state.”

Synopsis was nicked from Amazon.