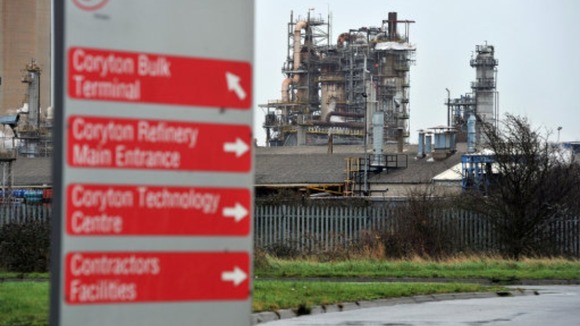 Coryton oil refinery workers and their families will be demonstrating outside the Vopak terminal in Purfleet from 10am this Saturday (21st July), demanding a public inquiry into the controversial sale of the refinery with the loss of 850 jobs.

The demonstration organised by Unite the union, follows the sale of Coryton to a consortium including Vopak, Shell and Greenergy. The deal, which has been shrouded in secrecy, will see Coryton converted into an import terminal for fuel, leaving jobs for just a handful of people.

Questions remain over the conduct of the administrator, PwC which has refused to give details about the sale or explain why serious buyers who wanted to keep Coryton refining were overlooked.

The workforce and the community are also questioning the government’s role in the refinery’s closure, which will to cost business and the regional economy an estimated £250 million. So far no response to a request from the Thurrock Council and Unite for a Government lead Regional Taskforce to be set up to deal with the “catastrophe” the region faces with the closure of the refinery.

People are angry that the government refused to grant state aid to keep the refinery running until a viable buyer could be found, as well as its failure to set up a regional task force to deal with the economic fall-out.

Unite and the Coryton workers have been joined in their call for an inquiry by Richard Howitt, Labour MEP and local politicians, including the leader of Thurrock Council, John Kent.

Unite national officer Linda McCulloch, said: “There are some major questions to answer over the sale of Coryton. We know there were serious bidders to keep the refinery going, but have yet to get satisfactory answers as to why they failed. Our fear is that Vopak, Shell and Greenergy were waiting in the wings and that it was a done deal for some time.

“Added to that was the government’s refusal to grant state aid, despite their French counterparts intervening to keep Coryton’s sister refinery in France running.

“To add insult to injury, ministers have ignored repeated requests to set up a regional taskforce to combat the massive economic fall-out. Coryton workers, their families and the community demand answers and a public inquiry.”

Come and join the Coryton oil workers and their families in their fight for justice and their community.