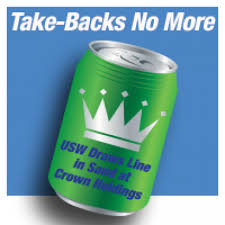 Prevented from addressing the board of directors, shareholders were told to submit written questions, but most went unanswered during the meeting at Crown’s Philadelphia headquarters.

Union members from several countries attended the meeting to seek answers for labour troubles at several of Crown’s global operations.

Kemal Ozkan, Assistant Secretary General of IndustriALL, the 50 million-member global labour federation, condemned Conway for refusing to answer questions about the impact of Crown’s actions on workers, communities and shareholders.

Crown has failed to consult with its European Works Council – as required under European law – over the divestment of operations in Spain that would have major impacts on workers and communities, Ozkan said.

Crown should also be telling shareholders why it has refused to abide by a Supreme Court decision in Turkey that ordered the company to recognize workers’ decision to form a union, Ozkan said. His plea was ignored by Conway.

Mark Lyon, Vice Chair of Unite, the United Kingdom’s largest union which also represents workers at 11 Crown plants, stood up in the middle of the meeting to protest Conway’s attempt to stifle shareholders.

It is unconscionable for Conway to attempt to prevent meaningful discussion of issues affecting shareholders, added Linda McCulloch, National Officer of Unite. Lyon and McCulloch were attending as part of Workers Uniting the global union formed by the united Steelworkers and Unite.

Shareholders submitted four written questions about the impact of an ongoing, seven-month labour dispute in Toronto, at one of the most productive plants in Crown’s global empire.

Conway refused to address any of the questions and provided no information to shareholders on the costs of the strike, loss of customers due to reputational damage, and the inability of Crown to fill orders in the lucrative Canadian market.

“John Conway refused to say why he forced employees to vote on a contract offer that provided few, if any, assurances that workers would have jobs even if they voted to end the strike,” said Joe Drexler of the United Steelworkers (USW). “The offer was like throwing gasoline on a fire, and signalled that Crown wants the labour dispute to continue rather than secure its customer base.”

“We wanted the company to explain why it is refusing requests from the Ontario Ministry of Labour to return to the bargaining table to negotiate a fair settlement, but we received no answer,” said Wayne Harrison, Chief Steward of USW Local 9176, whose members are on strike.

“We want Crown to explain why it is prolonging this strike and attacking workers’ living standards,” said Ozkan. “Crown has turned a small labour dispute into a global one and ultimately its shareholders will suffer along with workers.”