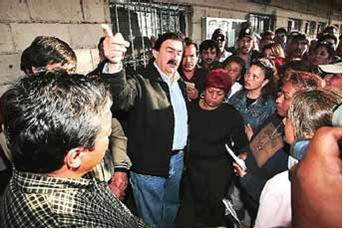 A federal court in Mexico has granted an injunction to Napoleon Gomez Urrutia against the arrest warrant issued against him for allegedly illegally disposing of $55 million in a trust for members of the Mineworkers’ Union.

Napoleon is the president of Los Minero’s, the Mexican mining and metals union, currently living in exile on trumped up charges in Canada and is supported by the United Steelworkers.

Napoleon’s union has been under almost permanent attack by employers and the Mexican government who are trying to introduce non independent trade unions in the country in an effort to break free trade unions.

The injunction granted by Manuel Barcena Villanueva, Judge of the First Unitary Criminal Tribunal in Mexico City, authorized protection of justice in a ruling that according to his defense means that the union leader has one foot back to Mexico.

This is the only outstanding warrant against Gómez Urrutia.  Since this administration began, there have been two federal arrest warrants issued against him and three for fraud in the civil courts. All these cases have been won by the leader who has been in exile in Canada for more than six years.

The offence complained of in this last charge is violation of the Law of Credit Institutions Act and is the only case on which the Attorney General has based his request for extradition.

“Napoleon now has one foot in Mexico, that is the reality, because ultimately it has been demonstrated that all this was orchestrated,” said Marco Antonio del Toro, defence attorney for Napoleon.

Hector Felix Estrella, treasurer of the union, had won an injunction against his arrest in the same court and Judge Barcena continued on the same basis in the case of union’s  leader, concluding that the government’s case was insufficient.

In August 2008 federal judge Silvia Carrasco  ordered the arrest of Gomez Urrutia for the crime of violation of Article 113 bis of the Law of Credit Institutions, for allegedly illegally disposing of $55 million dollars of the miners.

The charge was classified as a serious offense, so that that the accused had no opportunity to avoid jail if arrested;  however, throughout the six year administration of President Felipe Calderon, he was never extradited to Mexico .

Three arrest warrants were also filed against the mining union leader for  crimes of fraud relating to the same workers’ trust, but in the courts, derivative thereof money from the trust of workers, but he won all these cases through injunctions and appeals.

The Attorney General also obtained an arrest warrant for money laundering, but Gomez Urrutia was also able to have this canceled by the courts.

Since the leader fled to Vancouver at the beginning of the current Administration, and despite the extradition request made by the Attorney General, the Canadian government never initiated proceedings to remove him to Mexico.

Update: Despite record profits, company closes unionized factory in Mexico
Johnson Controls Inc (JCI) has announced plans to close its Interiores factory in Puebla, Mexico, less than one year after signing a collective bargaining agreement with an independent union, affiliated with the National Union of Mine and Metalworkers (Los Mineros).

The JCI workers had previously been “represented” by a protective union imposed on them by their employer, and had fought long and hard to be represented by a union of their own choice.

The 400 company employees will lose their jobs when JCI moves production to another Mexican facility, ostensibly for financial and “logistical” reasons. According to Los Mineros, the plant closure is “really an attack on independent and democratic trade unionism.”