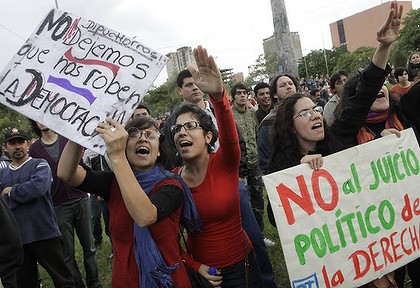 Latin American countries have expressed concern at the coup against Paraguay’s President Fernando Lugo, with Argentina’s President Cristina Fernandez, Ecuador President Rafael Correa and Venezuelan President Hugo Chavez saying they would not recognise the government of newly-installed leader Frederico Franco, who was sworn in by the same senate which, minutes before, had voted out Lugo.

Paraguayan lawmakers on Friday ‘impeached’ Lugo, 61, over his handling of a deadly land dispute.

Just an hour later 49-year-old vice president Federico Franco was sworn in as the new leader of one of Latin America’s poorest nations.

A torrent of furious responses poured in from across the region, not just from traditional left allies like Bolivia, Nicaragua and Venezuela, but also from centrist and even right-wing governments Argentina and Chile.

“Without any doubt there has been a coup d’etat in Paraguay. It is unacceptable.” Argentina’s Kirchner said.

She said the issue would be discussed next week at a summit of the South American trade bloc Mercosur, which includes Argentina, Brazil, Paraguay and Uruguay.

Even in Santiago, where Sebastian Pinera is Chile’s first right-wing president since the late dictator Augusto Pinochet left office, there was disbelief at the move.

The impeachment “did not fulfill the minimum requirements for this type of procedure,” Alfredo Moreno, Chile’s foreign minister, said on national television.

“We’re not going to cover up these actions that infringe terrible damage on our democracies and our peoples,” he said.

Venezuelan President Hugo Chavez said: “In the name of the Venezuelan people and as head of state, Venezuela does not recognise this worthless, illegal and illegitimate government that has been installed in Asuncion.”

In Washington, a US State Department spokeswoman, Darla Jordan, said: “We urge all Paraguayans to act peacefully, with calm and responsibility, in the spirit of Paraguay’s democratic principles.”

The surprise move against Lugo came after clashes last week left at least six police and 11 squatters dead on a huge estate poor farmers claim was acquired by political influence decades ago. Paraguay’s constitution only allows one presidential term, so Lugo would have stepped down in just over a year.

Franco has named a new foreign minister and charged him with explaining to governments elsewhere in Latin America that the impeachment drive was constitutional, albeit “a little quick”.

Crowds of pro-Lugo supporters and protesters took to the streets condemning the impeachment trial and expressing support for the leader. Police in anti-riot gear drove them back on horseback and using water cannon.

According to information from the Venezuela Solidarity Committee in the UK attacks have taken place on trade unions and left wing groups. More information when I get it….