Council of Europe says some Greek labour reforms are illegal 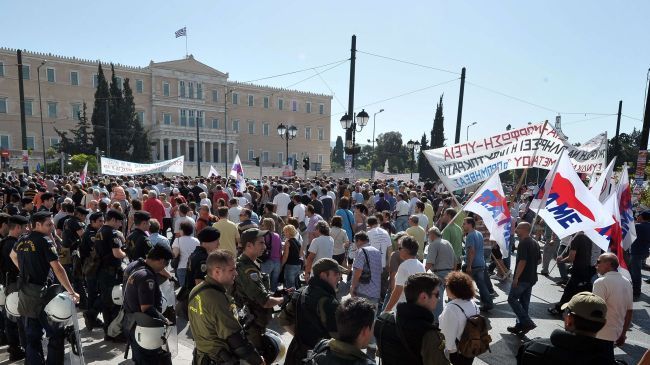 Reuters reports that reforms to Greek labour law aimed at cutting costs for the country’s recession-hit employers were illegal because they violated workers’ rights, a committee at the Council of Europe ruled on 19th October in a non-binding judgment.

In a decision it said could be used by trade unions to mount a legal challenge in Greece the Council’s social rights committee ruled that two reforms undertaken at the behest of the country’s international creditors contravened the European Social Charter and should be scrapped.

The ruling, based on an appeal by Greek public sector unions, concerned two measures adopted in 2010 that extended the “trial period” during which workers can be dismissed without notice to one year and cut the minimum salary for workers under 25 years of age to two-thirds of the national minimum wage.

The committee said the longer trial period ran counter to a clause in the charter which said workers were entitled to “reasonable” notice before their employment was terminated and that the lower wage meant young Greek workers had fallen below the poverty line of 580 euros a month.

“This ruling establishes the illegality of the measures concerned which can be invoked in the national jurisdictions,” Luis Jimena Quesada, the committee’s president, told a news conference ahead of the ruling’s publication.

Budgetary readjustments necessitated by the global economic crisis should not lead to an erosion of workers’ rights enshrined in the European Social Charter, it said.

The committee lacks the power to enforce its findings but makes recommendations to the Council of Ministers of the 47-nation Council of Europe, which can then adopt a resolution calling on a member state to take corrective action.

The ruling could prove embarrassing to Athens and its creditors as they put the finishing touches to a new round of cuts worth 11.5 billion euros to secure the next tranche of a 130-billion-euro bailout needed to keep Greece afloat.