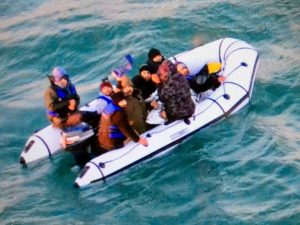 As the UK Government and the right wing media (and sadly the BBC) have been ramping up an ‘immigration crisis’ it is worth contrasting this with what is happening in Germany following Merkel’s ‘open door’ policy and how they have handled the many thousands of refugees fleeing war zones since 2015.

In 2015 Chancellor Angela Merkel opened the German borders to hundreds of thousands of war refugees. She faced open hostility and heavy criticism from the far-right Alternative For Germany (AfD) party who said the new arrivals would be a burden on Germany’s welfare system and economy.

But figures from Germany show that their companies have managed to attract more people to apprenticeships and to on-the-job training schemes due a growth in applications from asylum seekers from Afghanistan, Iraq and Syria.

The Head of Germany’s Labour Office, Detlef Scheele, has stated there was ‘no reason’ to be overly pessimistic about the country’s ability to cope with the record number of arrivals. “This is all going pretty well,” adding that the numbers were slightly better than expected. “These are good numbers, also taking into account that the people came here for humanitarian reasons and not for finding a job.”The number of employed migrants from the eight countries with the biggest numbers of asylum seekers surged by more than 100,000 to 306,574 in May 2018 compared with the same month in last year, data from the Labour Office showed.

Other important data shows that roughly three out of four refugees had found employment in which the company and the employee were paying full social insurance contributions.

There were 500,000 people from the eight main asylum seeker countries who were registered as ‘looking for work’ in July 2018.

However this includes people who are currently completing an integration and language courses.

There are still skill shortages in Germany with some young people un-willing to commit to apprenticeships and on-the-job training for up to three and a half years.

Germany’s crafts and trades, have long complained about skills and labour shortages, and have become active recruiters of refugees from war zones.

The head of the German Employers’ Federation (BDA) Ingo Kramer has said in the Augsburger Allgemeine newspaper recently: “Of more than one million people who have come to Germany since 2015, almost 400,000 have an apprenticeship or job”

He said the speed with which refugees had found work had surprised him. ZDH, the German confederation of skilled crafts, announced that the number of refugees doing a craft apprenticeships had risen more than 140 per cent year-on-year.

What a marked contrast to the ‘siege mentality’ rhetoric and Sajid Javid’s dash from his luxury Safari holiday to ‘take charge’ – all in the name of trying to make the Government look ‘tough’ on people who risk everything in seeking a better life for themselves.