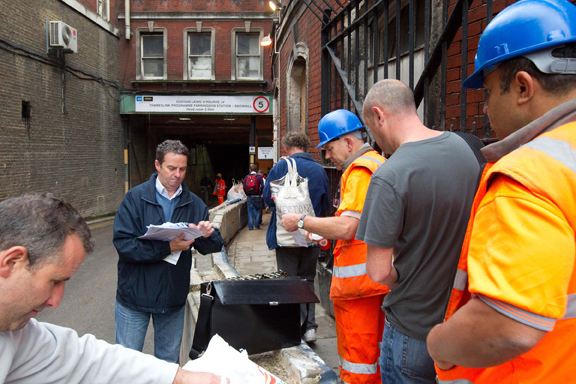 Protests and demonstrations continued at some of the UK’s largest construction site this week as electricians and skilled workers protested at an attempt by eight major contractors to break away from long-standing national agreements, cut workers pay and introduce semi-skilled workers on highly skilled and technical jobs.

The biggest demo was at the Lindsey Oil Refinery and ConocoPhilips refinery. There were also demonstrations at Kings Cross in London and at the site of the Commonwealth Games in Glasgow.

Five of the of the eight breakaway companies have written to workers with a stark choice to either sign new contracts on reduced pay and inferior terms and conditions, or face the sack on December 7th.  However one of the contractors MJN Colston have now agreed to abide by the national agreements.

Workers from the Lindsey plant came off-site for attend a meeting on  why they should join the fight against the plans.

Addressing the massed crowd, Unite’s John Allot said: “The employers are putting a gun to the head of their workers, saying sign this new contract on December 7th or be sacked. We can’t allow that to take place. Greater men than me fought for these agreements in the past and we’ve got to show them we’re not going to allow them to tear them up and deskill the industry on worse terms and conditions in the process.”

After workers had returned to the site, union members then marched down the road to the Conoco Refinery to join fellow protesters there.

Steve Syson, regional officer for Unite, said: “The employers say that they are making these cuts and want changes to the agreement on the basis of the current economic climate and the position they are in within that. I think that is a false statement. A lot of these employers are making millions and millions of pounds. They are very profitable companies, their directors take home big pay packets and big bonuses. They are asking our members to take up to a 30 per cent pay cut to support their business – it is just not on.”

Unite regional officer Chris Weldon said: “Our members in Lindsey Oil Refinery are furious about this attack by these so-called reputable companies aimed at reducing our members’ income by up to a third.”