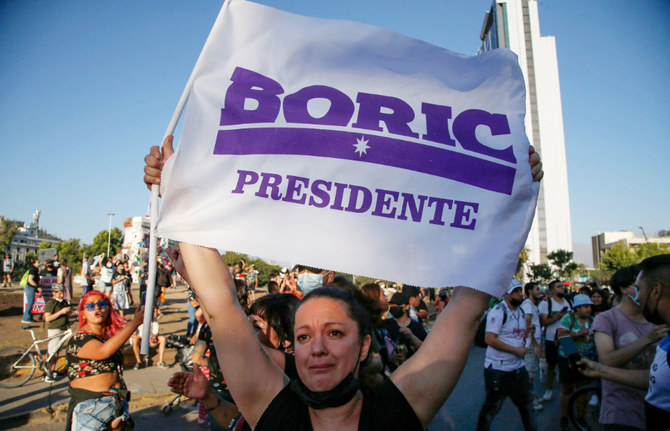 Men [and women] make their own history, but they do not make it as they please; they do not make it under self-selected circumstances, but under circumstances existing already, given and transmitted from the past. The tradition of all dead generations weighs like a nightmare on the brains of the living.  – Marx, The Eighteenth Brumaire of Louis Bonaparte.

A few days ago, when neofascist candidate José Antonio Kast was winning the first round of the country’s presidential elections, Chile’s 2019 rebellion aimed at burying neoliberalism appeared to be at an end. However, it has been greatly reinvigorated with the landslide victory of the Apruebo Dignidad (1) (I Vote For Dignity) candidate, Gabriel Boric Font, who obtained 56 percent of the vote in the second round, that is nearly 5 million votes, the largest ever in the country’s history. Gabriel, age 35 is the youngest president ever.

That result would have been greater had it not been for the policy of the minister of transport, Gloria Hutt Hesse, deliberately offering almost no public transport services, especially buses to the poor barrios, aimed at minimising the number of pro-Boric voters, hoping they would give up and go back home. (2) Throughout Election Day, there were constant reports on the mainstream media, especially TV, of people in the whole country but particularly at Santiago (3) bus stops bitterly complaining for having to wait for two and even three hours for buses to go to polling centres. Thus, there were justified fears they would rig the election, but the determination of poor voters was such that the manoeuvre did not work.

Kast’s campaign, with the complicity of the right and the mainstream media, waged one of the dirtiest electoral campaigns in the country’s history, reminiscent of the US-funded and US-led ‘terror propaganda’ mounted against socialist candidate Salvador Allende in 1958, 1964 and 1970. Through innuendo and the use of social media, the Kast camp spewed out crass anti-communist propaganda, charged Boric with assisting terrorism, suggested that Boric would install a totalitarian regime in Chile, and such like. The campaign sought to instil fear primarily in the petty bourgeoisie by repeatedly predicting that drug addiction – even implying that Boric takes drugs, crime, and narco-trafficking, would spin out control if Boric became president. Besides, the mainstream media assailed Boric with insidious questions about Venezuela, Nicaragua and Cuba, for which Boric did not produce the most impressive answers.

To no avail, the mass of the population saw it through and knew that their vote was the only way to stop pinochetismo taking hold of the presidency, and they had had enough of president Piñera. Their perception was correct, they knew that in the circumstances the best way to ensure the aims of the social rebellion of October 2019 was by defeating Kast and his brand of unalloyed pinochetismo.

As the electoral campaign unfolded, though Kast backtracked on some of his most virulent pinochetista statements, people knew that if he won he would not hesitate to fully implement them. Among many other gems, Kast declared his intention as president to abolish the ministry for women, same sex marriage, the (very restrictive) law on abortion, eliminate funding for the Museum in the Memory of the victims of the dictatorship and the Gabriela Mistral Centre for the promotion of arts, literature and theatre, withdraw Chile from the International Commission of Human Rights, close down the National Institute of Human Rights, cease the activities of FLACSO (prestigious Latin American centre of sociological investigation), build a ditch in the North of Chile (border with Bolivia and Peru) to stop illegal immigration, and empower the president with the legal authority to detain people in places other than police stations or jails (that is, restore the illegal procedures of Pinochet’s sinister police).

Kast’s intentions left no doubt as to what the correct option was in the election. I was, however, flabbergasted with various leftist analyses advocating not to vote, in one case because ‘there is no essential difference between Kast and Boric’, and, even worse, another suggested that ‘the dilemma between fascism and democracy was false’ because Chile’s democracy is defective. My despair with such ‘principled posturing’, probably dictated by the best of political intentions, turned into shock when on election day itself a Telesur correspondent in Santiago interviewed a Chilean activist who only attacked Boric with the main message of the feature being “whoever wins, Chile loses”. (4)

The centre-left Concertación coalition (5) that in the 1990-2021 period governed the nation for 24 years, bears a heavy responsibility for maintaining and even perfecting the neoliberal system, expressed openly its preference for Boric, and assiduously courted support for im in the second round. Hence, those who believe there is no difference between Kast and Boric, do so not only from an ultra-left stance but also by finding Boric guilty by association, even though he has not yet had the chance to even perpetrate the crime.

This brings us to a central political issue: what has the October 2019 Rebellion and all its impressively positive consequences posed for the Chilean working class? What is posed in Chile is the struggle not (yet) for power but for the masses that for decades were conned into accepting (however grudgingly) neoliberalism as a fact of life, until the 2019 rebellion that was the first mass mobilization not only to oppose but also to get rid of neoliberalism. (6)

The Rebellion extracted extraordinary concessions from the ruling class: a referendum for a Constitutional Convention entrusted legally with the task to draft an anti-neoliberal constitution to replace the 1980 one promulgated under Pinochet’s rule.

The referendum approved the proposal of a new constitution and the election of a convention by 78 and 79 per cent, respectively in October 2020. The election of the Convention gave Chile’s right only 37 seats out of 155, that is, barely 23 per cent, whereas those in favour of radical change got an aggregated total of 118 seats, or 77 per cent. More noticeably, Socialists and Christian Democrats, the old Concertación parties, got jointly a total 17 seats. The biggest problem remains the fragmentation of the emerging forces aiming for change since together they hold almost all the remaining seats, but structured in easily 50 different groups. Nevertheless, in tune with the political context the Convention elected Elisa Loncón Antileo, a Mapuche indigenous leader as its president, and there were 17 seats reserved exclusively for the indigenous nations and elected only by them; a development of gigantic significance.

The mass rebellion also obtained other concessions from the government and parliament such as the return of 70 percent of their pension contributions from the private ‘pension administrators’, which rightly Chileans see as a massive swindle that has lasted for over 3 decades. This has dealt a heavy blow to Chile’s financial capital. A proposal for a fourth return of the remainder 30 percent in parliament (end of September 2021) failed to be approved by a very small margin of votes. I am certain the AFPs have not heard the last on this matter.

The scenario depicted above suddenly became confused with the results of the presidential election’s first round where not only Kast came out first (with 27 percent against 25 for Boric), but which also elected Deputies and Senators for Chile’s two parliament chambers. Though Apruebo Dignidad did very well with 37 deputies (out of 155) and 5 senators (out of 50), the right-wing Chile Podemos Más (Piñera’s supporters) got 53 deputies and 22 senators, whilst the old Concertación got 37 deputies and 17 senators.

There are several dynamics at work here. With regards to the parliamentary election, traditional mechanisms and existing clientelistic relations apply with experienced politicians exerting local influence and getting elected. In contrast, most of the elected members of the Convention are an emerging bunch of motley pressure groups organised around single-issue campaigns (AFP, privatization of water, price of gas, abuse of utilities companies, defence of Mapuche ancestral lands, state corruption and so forth), which did not stand candidates for a parliamentary seat.

A most important fact was Boric’s public commitment in his victory speech (19 Dec) to support and work together with the Constitutional Convention for a new constitution. This has given and will give enormous impetus to the efforts to constitutionally replace the existing neoliberal economic model.

What the Chilean working class must address is their lack of political leadership. They do not have even a Front of Popular Resistance (FNRP) as the people of Honduras to fight against the coup that ousted Mel Zelaya in 2009. The FNPR, made up of many and varied social and political movements, evolved into the Libre party that has just succeeded in electing Xiomara Castro, as the country’s first female president. (7) The obvious possible avenue to address this potentially dangerous shortcoming would be to bring together in a national conference, all the many single-issue groups together with all social movements and willing political currents to set up a Popular Front for an Anti-Neoliberal Constitution.

After all, they have taken to the streets for two years to bury the oppressive, abusive and exploitative neoliberal model, and it is becoming clearer what to replace it with: a system based on a new constitution that allows the nationalization of all utilities and natural resources, punishes the corrupt, respects the ancestral lands of the Mapuche, and guarantees decent health, education and pensions. The road to get there will continue to be bumpy and messy, but we have won the masses; now, with a sympathetic government in place, we can launch the transformation of the state and build a better Chile.