Change The World – A History of Amicus

Here is John Haylett’s review of ‘Change The World’ the history of the trade union Amicus (now part of Unite – formed via mergers between the AEEU, MSF, GPMU and Unifi) written by John Callow (Lawrence & Wishart, £16.99), 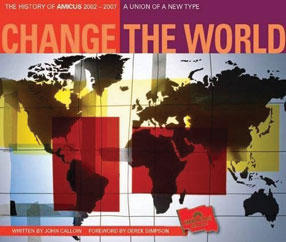 published on Tuesday this week in the Morning Star.

“Amicus was a short-lived union, lasting just five years from its inception in 2002 until its immersion in Unite five years later.

Yet it is difficult to exaggerate the importance of this brief interlude in the history of Britain’s trade union movement, which was instrumental in altering not only its structure but its approach.

Amicus began as a merger of electricians-engineers union AEEU and industry and services union MSF, with joint general secretaries Sir Ken Jackson and Roger Lyons from the two organisations.

It seemed a dream team for new Labour, with Jackson regularly described as Tony Blair’s favourite trade unionist and Lyons also seen as a scourge of the left.

Not all dreams come true and a legal challenge to Jackson’s continuation in office without an election spawned a contest with regional official Derek Simpson in the nearest trade union equivalent to a David and Goliath scenario.

Jackson had 352 branch nominations to Simpson’s 93 and expected to win “decisively.”

However, Simpson squeaked home after the Morning Star broke a “men in suits” story, relating how full-time officials in sharp suits and shiny new cars had attended a number of branches voting numerous times in breach of the rules.

Jackson’s defeat meant, as Simpson said, that “everything” in the movement had changed.

Out went single-union sweetheart deals and the use of the union’s block vote to back public-private partnerships and other new Labour shibboleths.

On his victory, Simpson commented: “Jackson had simply lost touch with the members. They resented his closeness to Tony Blair and new Labour, his knighthood, his readiness to show more sensitivity to employers than to them.”

The author’s sympathy for Simpson is clear, but he treats the views and records of Jackson and Lyons objectively in his meticulous record of Amicus’s emergence.

He also interviews Tony Dubbins and Ed Sweeney, the leaders of the GPMU print and Unifi finance unions, to get their perspective on how their amalgamation into Amicus took shape.

Errors are inevitable in such a huge enterprise but they are largely minor, such as mistaking Tony Chater for Mick Costello as the author of the Morning Star story exposing the legal advice given to News International on how to sack 5,500 print workers.

More serious is the suggestion that, when Simpson faced re-election in 2009, the Communist Party and Morning Star were backing challenger Laurence Faircloth until he stepped down to back Simpson.

No such decision was taken and, given Simpson’s consistent backing for the Star, would ever likely to have been taken.

That aside, Callow has produced a work that will not only delight Amicus members but will stand as a historical record of a vital period of our movement’s development”.

For those who have asked where to get a copy – the book is available to buy on line now at Waterstones, Amazon & LW Books