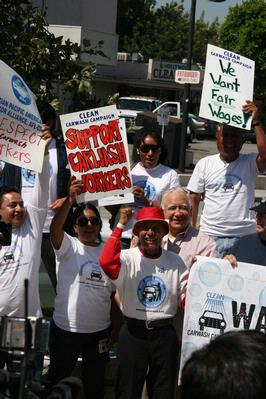 At the recent Steelworker’s convention it was announced that Los Angeles car wash workers – dubbed “carwashero’s”, were organising into the Steelworkers union – and that at four car wash companies they had won union rights for the first time.

Carwash workers have formed the ‘Carwash Workers Organizing Committee’ of the United Steelworkers to raise their standard of living, to secure basic workplace protections, and to address the serious environmental and safety hazards that exist in their industry.

AFL-CIO President Richard Trumka opened his speech by recognising car wash workers who had just won representation with USW Local 675 as part of an ongoing campaign to organize the hand car-wash industry in Los Angeles, where workers, often immigrants, are routinely underpaid and abused by owners and franchisers.

Article in the Morning Star