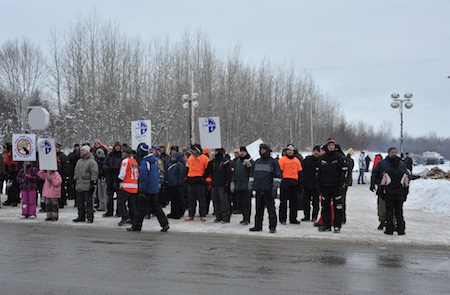 On January 1st, this year, Rio Tinto’s aluminium subsidiary Alcan locked out 780 members of United Steelworkers at its smelter and refinery in Alma, Québec, Canada.

The company wants unlimited contracting out rights, and has replaced full time, USW workers with subcontracting workers, on considerably worse conditions, when they retire. Sub-contracted work in the company is expected to increase from 10 per cent in 2010 to 27 per cent in 2012. The USW wants to create a floor of 750 permanent jobs at the Alma site.

Use of scab and replacement workers during a labour dispute is forbidden under Québec law.

According to the company the site is now run at one third of capacity with the help of 200 “management” personnel. USW has lodged a complaint with the provincial labour board.

The IMF and ICEM have sent a strong protest to Rio Tinto’s CEO Tom Albanese; “It is unprecedented in North America for a company to demand that a trade union accept the replacement of all permanent positions when workers retire with contract employees.”

You can also send a letter to Tom Albanese (with copies to IMF, ICEM and USW), making your opinions clear. See below

I write to express my deep concern over Rio Tinto Alcan and this subsidiary’s unjust lockout of 750 members of the United Steelworkers in Alma, Quebec. I understand the central issue in this dispute is Alcan’s attempt to gain unlimited outsourcing rights in a new collective agreement with the United Steelworkers union, and I feel this is a narrow, short-sighted view that ultimately will destroy the very social fabric of the community.

In fact, I have learned that Alcan’s management has neglected to even consider proposals made by the local branch of the Steelworkers, proposals that would provide a just and satisfactory compromise to this dispute. Alcan’s stance is destructive and socially irresponsible. It is also a direct attack on family supporting wage-earners that runs counter to Rio Tinto’s rhetoric on a sustainable future, particularly for important stakeholders of this subsidiary.

Please know that I will support the Steelworkers in all efforts to resist Alcan’s misguided social formula, and will join any fight the Steelworkers deem necessary in order to repel this attack on the livelihoods of their members in Alma. I urge you in this writing to intervene to end this lockout, direct Alcan management to return to bargaining and to negotiate a fair and acceptable labour agreement.

See a detailed background to the dispute here.