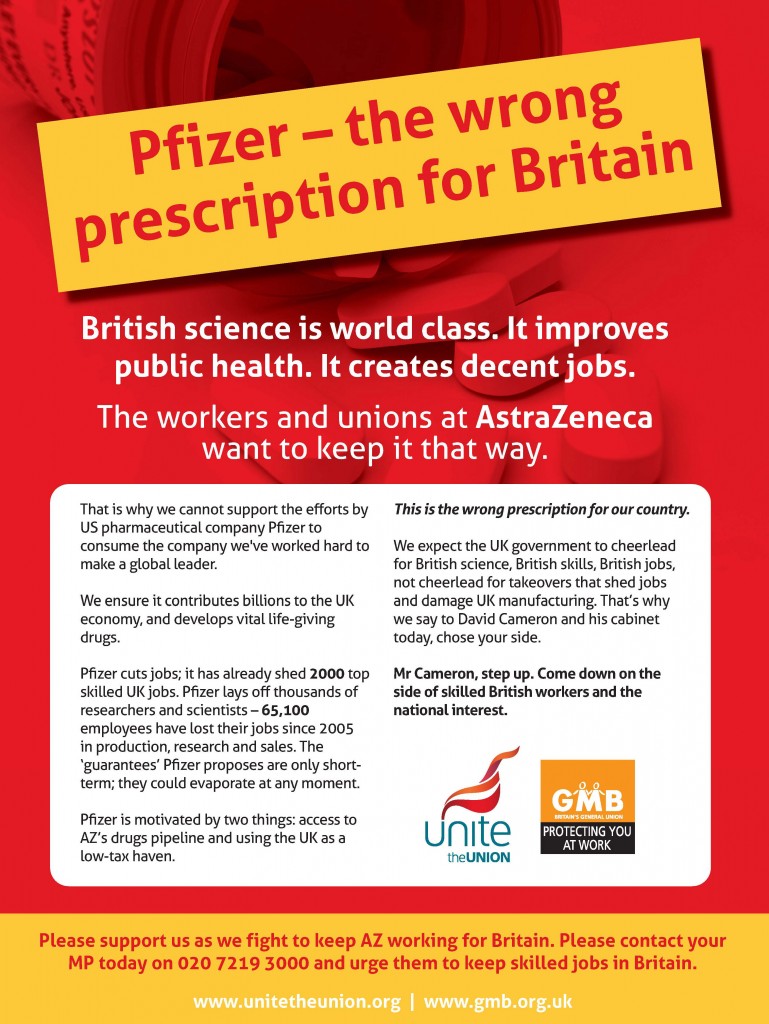 Just 14 per cent of people think that Pfizer’s proposed takeover of AstraZeneca is in the UK’s interests with less than 1 in 5 (19 per cent) confident that the government is doing enough to safeguard UK jobs and skills, according to a Survation poll.

According to the survey over three quarters (77 per cent) of Conservative voters believe all takeovers of this magnitude should be subject to a ‘public interest’ test, compared to a total across all voting intentions of 74 per cent.

The weighted poll of 1,005 people comes ahead of the House of Commons business select committee hearing on the takeover, with Unite and GMB appearing in the morning before the chief executives of AstraZeneca and Pfizer are grilled by the committee’s MPs.

A series of adverts will appear in the national media from Unite and GMB saying the Pfizer takeover is the ‘wrong prescription’ for Britain.

Commenting, Unite general secretary, Len McCluskey said: “The British public isn’t being fooled by Pfizer’s proposed takeover of AstraZeneca and has a complete lack of confidence that the government has British interests at heart.

“Pfizer’s track record is one of slashing jobs and cutting costs and its ‘guarantees’ could evaporate at any moment. As it stands it’s the wrong prescription for Britain. The takeover bid is motivated by a desire to use the UK to minimise its tax liabilities while getting its hands on AstraZeneca’s drug portfolio.

“David Cameron is in danger of once again misjudging the public mood and being on the wrong side of opinion. The British public wants to see the government cheerleading for British science, British skills and British jobs – not for takeovers that shed jobs and damage UK manufacturing.

“It’s time for David Cameron to listen to his own supporters and the rest of public opinion to apply a’ public interest’ test on the takeover and stand up for British manufacturing.”