Bye Bye Burley – Poll says he will be dumped at election 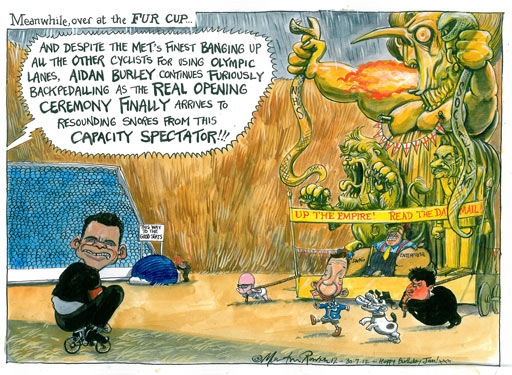 Trade union-hating MP Aidan Burley is facing a fight to save his seat after 94% of people responding to a local newspaper poll said they wouldn’t back him in the next election.

Burley, who is well-known as the man leading the campaign to remove facility time for union reps and for leading the charge for regional pay, hit the headlines at the turn of the year when he was sacked as a Parliamentary private secretary for attending a Nazi-themed stag party.

He was back in the news last weekend after tweeting his views of the Olympic opening ceremony. While the show received positive reviews across the board, the Cannock Chase MP angrily tweeted:

“The most leftie opening ceremony I have ever seen – more than Beijing, the capital of a communist state! Welfare tribute next?”

He followed that up with: “Thank God the athletes have arrived! Now we can move on from leftie multi-cultural crap. Bring back red arrows, Shakespeare and the Stones!”

As criticism began, he rapidly attempted to back-track, tweeting: “Seems my tweet has been misunderstood. I was talking about the way it was handled in the show, not multiculturalism itself.”

But the belated apology was not enough to prevent him being disowned by Downing Street, which released a statement saying: “We do not agree with him”.

Now his local daily newspaper has run a poll asking: Would you back Conservative MP Aidan Burley in the next election?

You can vote here.

This blog first appeared on Union News on August 4th and also appears on the website of the LCDTU.