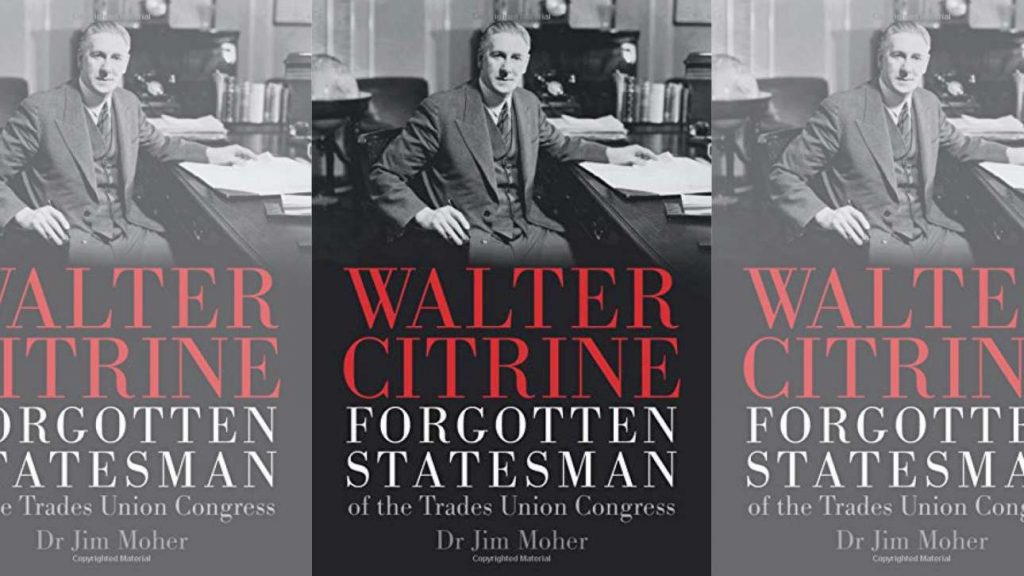 Political biographies can be hard going at times but this well crafted and detailed view of Walter Citrine does not fall into that category. Jim Moher has chosen to rely heavily upon the extensive diaries and document of Walter Citrine (who was the third General Secretary of the TUC) and intertwined that with extracts/comments from biographers of contemporary figures in the political period covering the first half of the 20th century and beyond.

The book takes us through a chronology of Citrine’s life including his early family/work background and initial steps into the trade union movement.

It then leads us into the period from 1925 to 1946 which focuses on the most influential period of Citrine’s trade union and political career. We then learn of his contribution to the Nationalised Industries, post war, and conclude with his contributions to the House of Lords.

I, like many who have spent their lives involved in the trade union movement, have known of the existence of Citrine through his extensively used “ABC of Chairmanship” originally published in note form as a guide to Electricial Trade Union branches in Liverpool to enable them to complete their meetings without deteriorating into inconclusive shouting matches. Many will have known that he was also General Secretary of the TUC for two decades from 1926 to 1946 but I suspect most will not be familiar with his contribution during that time to the movement and internationalism.

Dr Moher, through his creative analysis of Citrine’s own records and records of meetings throughout that period, is able to provide an insight into discussions and arguments behind the headlines which covered the General Strike, the failed Labour Government in 1931, the fight against fascism in the 1930’s and his international role during the war years.

To cover such a breadth of activity in just over 400 pages and still leave the reader feeling they have an in depth knowledge of the period is a gift that few biographers emulate. To provide this insight into a man who has frequently been dismissed by trade unionists as simply an administrator with a passion for files, has meant that his true contribution to the movement, and the country, is released to all who take time to read this excellent biography.

This entry was posted in Trade Unions, Trades Union Congress. Bookmark the permalink.