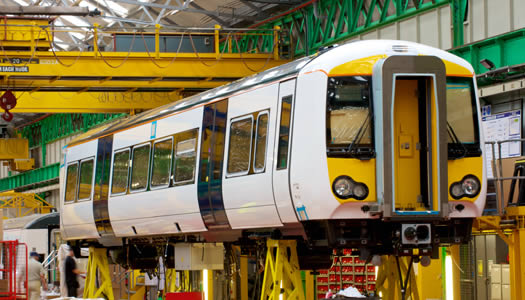 Unite has welcomed a poll out today which shows that voters of all parties are united in their anger over the government’s decision to award the billion pounds-plus contract to build Thameslink trains to Siemens.

The government’s preferred company would manufacture the trains in Germany, ahead of UK-based bidder Bombardier.

Unite says that the findings, which come as unemployment rises and hopes for a manufacturing-led recovery recede with the poor growth figures, proves that voters will make government pay if it turns its back on British industry.

The union says that the government’s decision, made in Spring this year, puts at risk the very survival of Bombardier in the UK, and with it rail manufacturing in the nation that gave the world train transport – but it also places Derby, a manufacturing hub, in jeopardy.

Independent polling company Survation surveyed voters in both Derby seats – one held by a Labour MP, the other by a Conservative – and found a unanimity of view that government ought to be doing what is ‘Best for Britain’, and that means supporting jobs over cost.

A staggering 87 percent of all voters did not believe the government had acted in Britain’s best interests in awarding the contract to Siemens, including some 84 percent of Conservative voters in the Derby seats.

Commenting on the poll’s finding, Len McCluskey, general secretary of Unite, the lead union at the Bombardier site in Derby, said: “Voters are united on this – they want the government to do what is the best for Britain. In the case of Bombardier they are clear that this means thinking again on the Thameslink contract. With the economy so clearly struggling, voters are asking why government is even given a moment’s consideration to a bid that would see it turn its back on skilled manufacturing jobs in the UK. How on earth can we rebuild our economy if we cannot hang onto those who make the products we can sell to the world?

“Where there is political will, there is a way. This deal has not yet been done so we urge the government to think again, with the Prime Minister himself rolling up his sleeves to ensure that the highest political priority is given to examining how the thousands of jobs now at risk can be saved.

“The people of Derby are sending a warning. They are saying neglect our community and we will not forgive you. I firmly believe that this is a universal view among voters – they want a government that stands by our jobs.”

Unite and the RMT say that the award of the Thameslink contract to Bombardier puts thousands of skilled jobs directly at risk. In June, the workers were issued with a 90-days consultation notice which mean redundancies could begin as early as October. Additionally, there are some 1000 contract companies in the Bombardier supply chain.

The Transport Select Committee will hold a special session on the government’s decision on September 7th at which the trade unions, including Unite, will give evidence.

The full Survation poll can be found here.