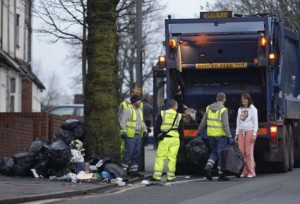 Birmingham City Council’s bin collectors have voted to take further strike action in a row over pay. Union officials say that workers will strike for two days on January 13th and 14th.

The walkout will add to the disruption to refuse services caused by cold weather, and an earlier decision by collection workers to work to rule from the 22nd December, 2010.

The dispute in Birmingham centres on equal pay and the method the council used to achieve this.

Previously, the council introduced an enhancement worth about £4,000 a year to equalise gender pay. However, in 2010 a court ruled that this action was incorrect or “not equality proofed”. Now the council has said it needs to remove the enhancement, which has the effect of reducing workers pay.

The GMB and Unite are unhappy that the current pay review will mean that workers such as refuse collectors, garage staff and road cleaners will suffer pay cuts, and has accused the council of ignoring union advice when it made its original decision.

Unite has also accused the council of “escalating the current dispute” by threatening to pay the refuse collectors not by their contracted hours but by the amount of waste collected, and by employing casual workers to clear the build-up of rubbish.

Lynne Shakespeare, Unite’s regional officer, said: “We’ve already told the council that they are spending more effort and taxpayers’ money to break this strike than it would cost to resolve it. The council recruited 200 casual staff to break the strike and it cost the council £20,000 just to provide workwear for them, before any wages and dust wagons are paid for.”

The trade union also accused Birmingham City Council of escalating the dispute by removing the right of union representatives to take time off to attend meetings.

Unite regional secretary Gerard Coyne claimed the council was escalating the dispute by threatening to pay the refuse collectors by the amount of waste collected, rather than for their contracted hours

This entry was posted in Employment Rights, Politics, Trade Unions, Unite The Union. Bookmark the permalink.