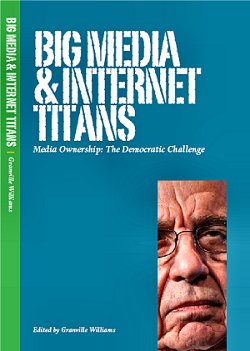 The central argument in the new book, ‘Big Media and Internet Titans’ is that media pluralism must be put back on the political agenda. The book has been published by the Campaign for Press and Broadcasting Freedom.

“We identify key policy issues,” said the book’s editor, Granville Williams, “and argue that governments need to recognise that unless there are clear rules and limits on media ownership, democracy suffers. The Leveson Inquiry demonstrated this unequivocally.”

‘Big Media & Internet Titans’ highlights the democratic challenges posed by excessive media power, both in the hands of ‘old media’ – newspapers, television, radio – but also through the emergence of the four giants of the internet age – Google, Apple, Facebook and Amazon.

Never before have such global behemoths grown so fast or spread their tentacles so widely.

The book poses urgent questions about media ownership and throws down the democratic challenge for politicians to embrace policies which will promote diverse, democratic and accountable media.

Or you can pay via Paypal by clicking here.