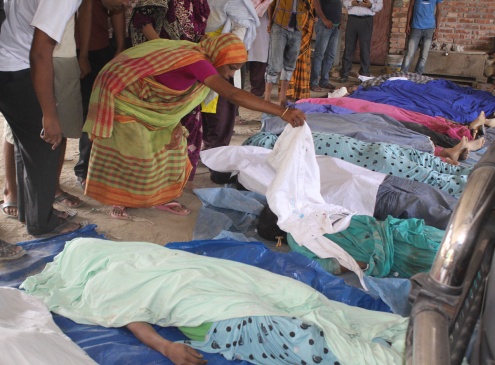 Bodies of those killed in the Rana Plaza Building Collapse

IndustriALL Global Union reports that it is working hard to get brands and retailers that sourced from Tazreen and Rana Plaza to participate in talks in Geneva on 11th and 12th September. The meetings will seek to achieve proper compensation payments to the victims and survivors of the two industrial accidents.

The meetings will be hosted and neutrally chaired by the International Labour Organisation (ILO) and the message to brands from IndustriALL will be clear,

IndustriALL Assistant General Secretary Monika Kemperle stated: “The families and the injured have already waited far too long for. Companies who are serious about conditions in their Bangladeshi production chain can send a clear sign of their sincerity at these meetings”.

The Tazreen factory fire killed 112 workers and injured over 120 in November 2012. Major European retailers C&A, KiK and El Corte Inglés agreed to contribute to a US $5.7 million compensation plan for the victims of the Tazreen fire in a meeting hosted by IndustriALL in April.

Walmart again represents the worst end of the spectrum of different corporate responses to the issue. Complete indifference to the process has been shown so far from the large American retailer.

Walmart products were made by 40% of the Tazreen product lines.

Full details of which brands and retailers participate will be released at the time of the meetings.The compensation plan was developed by IndustriALL and its affiliates in Bangladesh following the Spectrum factory collapse in 2005.

The model is supported by international labour rights groups and is the industry’s best practice compensation mechanism.The model was used after the December 2010 fire at That’s It Sportswear, a factory producing for Gap and other US brands, and the fire this January at Smart Export Garments, which was producing clothes for Inditex and others.

The formula sets out clear guidelines for payment to families of dead and injured workers and takes into account loss of earnings, pain and suffering, and also medical costs, funeral costs and other important family expenses.

The estimated long-term compensation for Rana Plaza will be more than 54 million euros (71 million USD).The work around the compensation issue is not part of the Bangladesh Accord on Fire and Building Safety. But the strong spirit of cooperation built by the Accord feeds into the process.