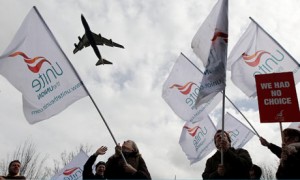 In a statement issued today Unite General Secretary Len McCluskey said: “British Airways cabin crew voted last month overwhelmingly, and for the third time, to take industrial action against their employer on a number of issues relating to the company’s conduct of industrial relations.

“It was further proof, if proof were needed, of the fact that management at this blue chip British company has completely lost the trust of thousands of their key staff – loyal, professional and customer-facing.  In announcing the ballot result, Unite immediately appealed to management to meet the union for negotiations to resolve the outstanding issues which could have avoided any further disruption to the airline’s operations.

“Since then, Unite has not heard a word from the company.  There has not been the slightest flicker of interest from BA in holding talks to address the concerns of their own employees.

“Instead, BA has launched a legal blitz against the independent scrutineer used to conduct this ballot, the Electoral Reform Society.  This doubtless reflects BA’s decision to place its chief legal officer in charge of employee relations. While not addressing the union directly, BA advised the ERS that the ballot was unlawful and that any industrial action taken on the basis of it would be unprotected.  This is merely an assertion by BA – however, the ERS decided, on the basis of protecting its own legal position, to issue a qualification in its official report on the industrial action ballot.  Unite therefore cannot call industrial action based on this ballot, since such a move would expose our members to sanctions by a bullying employer.

“However, if BA management believes that it can secure industrial harmony by these methods it is living in a fools’ paradise.  Only negotiation, not litigation or intimidation, can place industrial relations on a sound footing and start to heal the wounds caused by this dispute.

“BA cabin crew have repeatedly shown that they will not be browbeaten by bullying and legal intimidation.  Unite is therefore immediately setting in hand preparations for a further industrial action ballot on the issues arising from management’s breach of agreements and policies of industrial intimidation, including amongst others the withdrawal of staff travel concessions, unjustified and draconian disciplinary sanctions against representatives and other members, the employment of strike-breaking cabin crew on different terms and conditions, the introduction of a new “mixed fleet” of crew again on different terms, and the intention to degrade union representation arrangements among cabin crew.

“Failing a willingness by BA management to take its employment relations seriously and start negotiating, we would anticipate giving the company formal notice of this fresh ballot within the next ten days or so.  BA management needs to understand that it will never break the spirit of cabin crew, and that customer uncertainty and confusion will continue until it starts listening to its staff.”