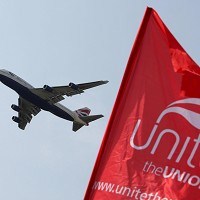 The long-running dispute between British Airways and Unite cabin crew came a step closer to ending as the ballot on the settlement negotiated between the airline and Unite the union opened.

The agreement will see travel support for cabin crew, withdrawn during last year’s strike action, returned to the 6700 or from whom it was taken and third-party arbitration for the dozens of crew placed on disciplinary proceedings. It comes with a strong recommendation to accept from Unite.

“The manner in which you have conducted yourselves has been exemplary. This agreement gives all of us an opportunity to move forward.  It will not be easy, but throughout the dispute we have only ever sought an honourable settlement. Your reps have played a fantastic role and I have the utmost respect for them.  But for us to achieve a lasting peace, they will need your continued support, now more than ever. There is no doubt in my mind that the new CEO values Cabin Crew and wants a bright future for all. I believe that your continued community spirit and solidarity will guarantee such a future and I strongly recommend that you vote yes.”

The ballot concludes on Wednesday, June 22nd.  If accepted by the crew, the deal will be implemented with immediate effect.