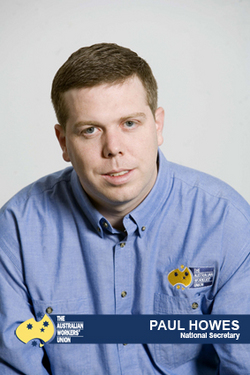 The following is an update on the current situation in Fiji where trade unions are being repressed by the government. It was sent to us by Paul Howes, who is the National Secretary of the Australian Workers Union.

The fifth anniversary of the military coup led by Commodore Frank Bainimarama has just passed. The Commodore celebrated the fifth anniversary with his election as Vice Chairman of the International Sugar Council, despite union protests organised outside the London meeting. Sugar is a key dollar earner for Fiji. Brazil and India nominated Fiji, part of a pattern of BRIC countries consistently backing the regime at international meetings.

Trade union leaders have been targeted for harassment, beatings and held incommunicado, without any charges being laid against them. The most recent high profile attacks on trade unions involved Daniel Urai, the President of the Fiji Trade Union Congress (FTUC), Felix Anthony, the Secretary of the FTUC, and Shalend Scott, the Secretary of the Fiji Airline Pilots’ Association. The leadership of the Fijian National Union of Factory and Commercial Workers, have not escaped harassment by the Fijian police and military.

In September Kenneth Zinck, a former Fiji Labour Minister and union leader associated with FICTU, arrived in Australia asking for a protection visa. He says he escaped the island state after balaclava clad soldiers visited his home threatening his life.

Fiji has 850,000 citizens and two national trade union centres the Fiji TUC (FTUC) and the Fiji Islands Council of Trade Unions (FICTU). Until recently there has been little or no co-operation between them. FICTU broke away from FTUC in 2002 taking with them 15 unions. Only the FTUC is affiliated to the ITUC.

Several trade union meetings have been broken up by police this year. On August 13th police broke up a regular meeting of the FTUC after revoking their permission to meet. This action happened shortly after members of the FTUC met with a high level ILO delegation in Fiji investigating workers’ rights violations.

In September a social gathering involving Felix Anthony and other union activists was broken up by police – deemed illegal as a meeting of three or more. In October Daniel Urai, the FTUC President, after he returned from a meeting of the Commonwealth Heads of Government in Australia. He was charged with inciting political violence by urging people to overthrow the government.

In November Felix Anthony was held incommunicado for over a week where he was allegedly beaten every day. The military has detained Anthony several times in 2011 interrogating him as to whether he knew of any attempts to overthrow the government and whether he supported the current regime. Each time he was beaten for several hours by military personnel.

A number of Global Union Federations, especially the International Transport Workers Federation and the International Federation of Journalists, have been active in support of their Fijian affiliates. ITF affiliates in Australia have led a campaign against the regime because of evidence that the Fiji airline, Air Pacific, paid a New York legal firm to draft the regime’s latest anti-union decree the Essential National Industries (Employment) Decree ( see below). A major shareholder in Air Pacific is the Australian airline Qantas.

The Australian Council of Trade Unions is planning to lead a union delegation to Fiji this week to meet with unionists to discuss how best to campaign against the regime’s attacks on worker rights.

Daniel Urai is expected to face a trial commencing in 2012. Both union leaders have been banned from travelling outside Fiji and Urai is subject to a curfew that restricts his freedom of movement within Fiji.

The Essential National Industries Decree is seen to be the most extreme of the decrees. It denies any workplace rights to private sector workers in the Finance, Telecoms, Civil Aviation and Public Utilities industries declared essential. This decree ends all existing collective agreements; creates ‘yellow union’ bargaining agents, bans workers from involving officers of their existing unions from any involvement in negotiations; imposes compulsory arbitration of disputes and virtually ends all right to strike action.

Most commentators say the decree was introduced to target the financial health of the most powerful and outspoken unions who have the ability to organise opposition to the regime.

NB: The ACTU delegation were deported from Fiji on arrival at the airport in Fiji.
ICTUC Report – click here