The TUC, and many others, have long argued that austerity is self-defeating. Slashing government spending and putting up taxes against a backdrop of a weak economy will not only depress growth, it will fail on its own terms as a means of reducing the deficit. The fall in demand caused by ‘fiscal consolidation’ will simply reduce the government’s tax take and increase social security spending. 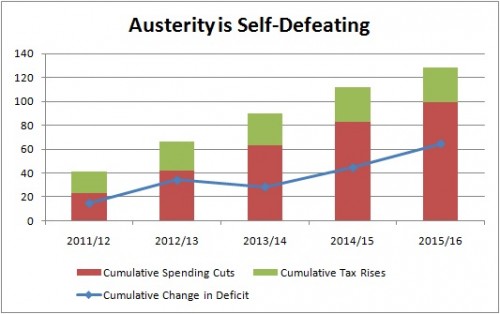 The graph above demonstrates that is now what is happening in the UK. It shows the cumulative cuts in government spending and tax rises against the cumulative change in the deficit. (Tax and spending changes from Budget 2010, deficit changes from the newly released round-up of independent forecasts).

Beyond Austerity: A Growth Plan for Europe