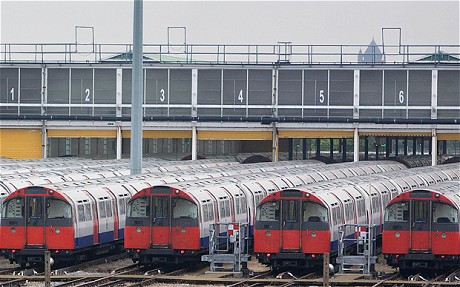 Simon Weller, National Organiser of ASLEF has circulated this explanation of what today’s London Underground dispute is all about. Please pass on, post on your Facebook, blogsites and tweet.

“The 1992 LUL “Company Plan” resulted in a complete renegotiation of Train Operators terms and conditions.  Part of these agreements was a clean salary which meant no enhancements for overtime or bank holiday working.

Therefore payments for overtime and bank holidays are at flat time with no day in lieu.  If a driver is booked off on a bank holiday they are deducted a day’s annual leave.

Since 1992 there has been a steady increase in the level of services run on Boxing Day.  This had not been foreseen or reflected in the original Company Plan.

Passenger usage on Boxing Day has also increased significantly since 1992.

Where it had once been the practice that few train operators were required on Boxing Day it has now become more common for them to be rostered to work.

In early 2010 LUL sparked the dispute by dramatically increasing Boxing Day services and unilaterally ending agreements where depots would be booked off “not required” on a rotational basis.

There was a 24 hour strike on Boxing Day 2010 in response to this.  We have been seeking a negotiated solution since.

ASLEF had wanted a system based on volunteers.  LUL had expressed concerns that they would not get enough volunteers and incentives were discussed, this is where the triple time myth has crept in.

As part of fully funding the cost of the incentive pay ASLEF proposed a cost neutral/self-funding solution.  The self funding element would come from savings made in agreed changes to rostering and transfer of staff arrangements.  This would give LUL greater year round flexibility.

The actual cost of the incentive would not be that significant, as it would only apply to approximately 800 drivers and only for one day’s work (26th December); easily covered by the proposed savings.

The dispute over this issue has been running for a significant period of time and we have been prepared to negotiate.  LUL management have refused to discuss this issue right up until November of this year.

However, this year and last the LUL management preferred to go to court rather than talk.  Despite Boris’ promises of No Strikes we have not had any approaches from the Mayor’s office over this matter”.